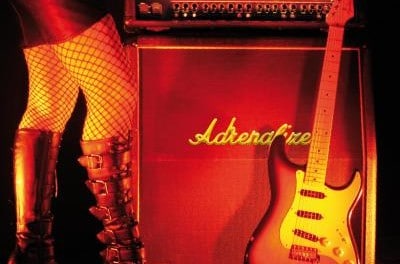 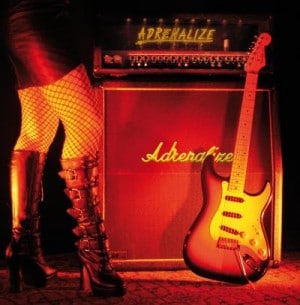 Review:
The word “Adrenalize” automatically brings images to my mind of Def Leppard‘s disappointing follow-up record to their diamond certified platinum selling hit album Hysteria. Nevertheless, German rockers Adrenalize have done a good job with their self-titled debut album to the point that I am now able to start deprogramming my brain from constantly associating the word “Adrenalize” with Def Leppard.

I was expecting to hear some ’80s hair metal music from Adrenalize when I started playing their album simply based on the record cover featuring a woman’s legs in fishnet stockings and knee high boots along with a guitar and a big amp. However, Adrenalize are quite far from the ’80s hair metal fare and really play an enjoyable brand of classic hard rock. Although Adrenalize‘s self-titled debut album came out in 2015, the music and vocals on it sound a bit dated or at least seems to incorporate a lot of ’70s rock sounds. My initial thoughts when listening to lead vocalist/guitarist Andreas Ellner sing on the opening track “Rock N’ Roll” was that his vocals seem to be a bit low or buried in the mix. However, this issue seemed to rectify itself by the time that the second song “Breakout” comes along.

If you like high pitched vocals with a real classic rock sound, Adrenalize will likely be just what you are looking for. The first three songs on Adrenalize are all quite good with lots of great melodies and a consistent pace throughout. My favorite tracks on Adrenalize are the first two along with “Ship Of Fools” with its excellent dual guitar harmonies and “Bitter Pill” with its scorching guitar solos towards the end of that song. I actually appreciate that Adrenalize only put eight songs on their album because all of the tracks are good ones. After all, why fill an album with a couple of filler tracks when you don’t have to? Whether I personally will be revisiting Adrenalize many times in the future is still up in the air since classic hard rock is not my “go to” music but there is no doubt that Adrenalize have served up some quality music on their debut album. If you’re interested in purchasing the album, it appears that the only way might be from the band directly and I think that would be money well spent.