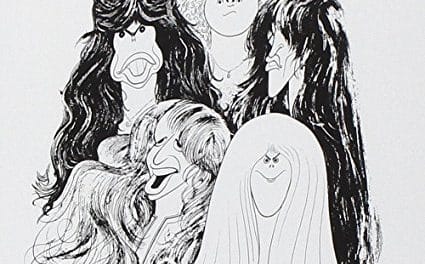 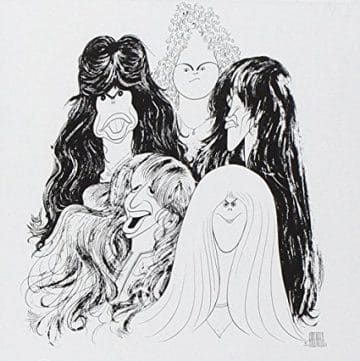 Review by Deke:
Draw The Line was my first Aerosmith album. I was used to cover drawn albums when I was young. I mean KISS were the leaders in that and here comes Aerosmith with a cool band drawing on the cover and they call it Draw The Line. Cool play on words fellas! Haha.. as a 13-year-old at the time (1980), I thought Aerosmith were into art class but a little later on realized Aerosmith were into the seedier side of art class.

Let’s check on Joe, Steve, Joey, Tom and Brad and see how they shaped some musical landscapes for a one young fella!

“Draw The Line” — What an intro to Aerosmith with this tune. Holy crap! Here comes Joe navigating some serious slide guitar and his side kick Steve belting out the cowboy song! “Heads I win, tails you lose” sez Tyler! Yep, you win Steve. Man, he basically throws up a tonsil in that crazy part of the song — you all know it — the part that goes sumthin’ like “Checkmate don’t be late, take another pull, that’s right impossible” ….Hahaha! What a rip of an opening song!

“I Wanna Know Why” — Man, this is a great song. Some cool keyboards rock this song along just fine. Thank you very much. This is my first Aero album and so far so good! If the stories are true that they were totally blasted thru this, well keep blasting or as the kids say nowadays ….Blazing!

“Critical Mass” — The whole band shifts a tempo down from the first two numbers and they still rock it with Tyler telling his story about the seedier side of living kinda like spaced out actually. Yeah, Tyler‘s trippin’ into who knows where but he makes trippin’ seem real cool…. “Tell me how ya recover from the time in space as it takes you away.” That’s what Stevey sez….honestly….

“Get It Up” — Tyler/Perry kick it out with some cool slide guitar once again. Like Steve shoots into town in a police car and your daddy said he took it a little too far! Cool tune. Off the walls Aero….

“Bright Light Fright” — Joe takes the lead vocal on this one and it’s a steamer of a track. Throw in some cool sax and some cool leads and yep this is Joe doing solo time so Steve can ramp it up into the next track!

“Kings And Queens” — Wow! This is epic Aerosmith. Steve talks about the “Kings And Queens” and guillotine’s taking lives denied! Basically, Steve is singing about greed in 1877 or perhaps 1977 with all there handlers around. That’s my spin on it and for a band as they say being outta of it. They pull one out of the fire here that’s for sure.

“The Hand That Feeds” — “Doctor, Doctor, Doctor” Steve shouts… Is someone calling a code on Aero‘s behalf? I have to say though I think by this point, they were starting to lose a bit of creative gas but then the endless lifestyle of craziness may be catching up. Still, they somewhat pull this one out. Tom and Joey set the rhythm pace.

“Sight For Sore Eyes” — I prefer the live version on Live Bootleg. This version is kind of a slow tempo compared to the very ramped up live deal. Still, it’s neat to hear it in its original state.

“Milk Cow Blues” — This is a cover tune jammer that ends the album and I really think Aero ran out of steam by this point so a cover tune was needed to push the album to the 35 minute mark. I’m sure the record company was freaking on them for lack of material but I really don’t think the Smith boys cared too much by this point!

In conclusion, Draw The Line is a good but not great Aerosmith album. I would say out of the nine songs, six would stand up to any of their previous material to 1977. But hey, for me, this was a good starting point into my internship at Aeroforce 1!

Review by John Stoney Cannon:
At the tail end of 1977, Boston rockers Aerosmith were set to release their fifth album in four years and nail the capper on what would be the original classic era of the band before the wings started to fall apart. While the band would eventually release a decent album in Night In The Ruts as Joe Perry was pulling away, it was successor Draw The Line that would give them their last true classic album of the seventies and last big release until Permanent Vacation in the eighties.

As the country was coming off celebrating a bicentennial, there was no other band more American and rock and roll than Aerosmith. While kids in the seventies wanted to be entertained by KISS much like Star Wars got them off, teenagers (in particular teenage boys) wanted to be Aerosmith and that’s no surprise as no other band was more qualified to be posterboys for the era’s “sex, drugs, and rock & roll” ideology. Simply put, no other band got laid more, stoned more, or rocked more. Toss in a killer catalog of songs that already included tracks soon to be on the group’s 1980 classic Greatest Hits including “Dream On,” ”Walk This Way,” “Sweet Emotion” and “Back In The Saddle” and you’d be hard pressed to think that album number five would be anything less than stellar.

While Draw The Line came and went with not much in the way of a chart busting single, the first of the two singles released from the album — the title track and “Kings and Queens” – are now considered classic Aerosmith tracks and were also included on the 1980 best of compilation. This could possibly be attributed to Aerosmith returning to their more stripped down rock and roll roots as well as doing what few other bands did better in the decade — produce complete albums. At just over 35 minutes over nine songs, Draw The Line is an album of lesser known incredible deep cuts that rips, rants, and rocks in a loud, sexy, dirty, bluesy way that only Aerosmith can pull off. The Rolling Stones may have made a living partly off of Keith Richards’ whiskey and cocaine rock and roll swagger but in Aerosmith, the world had the equivalent of five “Keefs” fueled with red-blooded American attitude. In the center of the seventies, that was pretty tough to top.

Unwrapping the album a little over a year after its release, I was as usual taken in by the cover featuring black and white drawing by Al Hirschfield, an artist known for his outlandish line drawings of celebrities. To this day, it remains a striking image and I was still staring at it when the title track came blaring out of my stereo speakers into my bedroom. As far as an opener, “Draw The Line” is close to perfect in that it’s not enough that the main opening riff is badass, when the vocals kick in, the song jumps into a whole other gear and just keeps climbing until the end. In many ways, it sets the listener up for what is to be a climbing rollercoaster of an album. The band follows that up with the twin guitar solo intro of romp “I Wanna Know Why” and from there the only thing that veers from the classic sexy ‘Smith groove is quick stomper “Bright Light Fright” making for an intense ride until the band jumps into a bit of funky on “Sight for Sore Eyes” and finishing up with “Milk Cow Blues.”

While rock fans in general may be familiar with the single releases from Draw The Line, it’s really the lesser known tracks like “Critical Mass” and “The Hand That Feeds” that make the album a near perfect rock and roll release and a large reason why the record is best enjoyed straight through. Back in the seventies, the only thing that kept me from rocking it straight through was having to flip the record or cassette over but when you come across an album that is not only that badass, but that also grabs your soul like Draw The Line and so many other records back then did, the short pause to turn it over was a tiny sacrifice to have to make.

While history shows that Aerosmith somehow managed to grab their throne back again in the eighties, the previous decade still remains the group’s more lethal and dangerous period. Teetering dangerously on the edge, they managed to not only keep it together but in the process create some of the most incredible and influential rock and roll ever recorded and for all its magnificence, Draw The Line may just be the most underrated of Aerosmith albums from that period. The shame in that is that as a whole it arguably could possibly be their best.