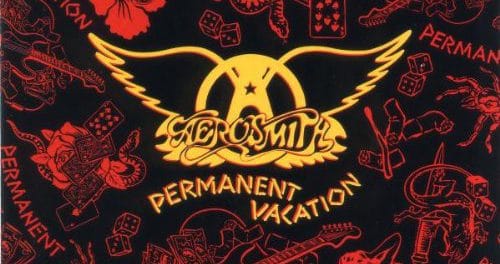 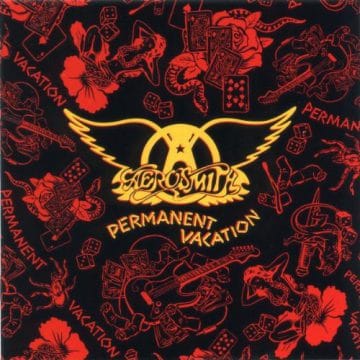 Review:
By the mid-’80s, Boston rockers Aerosmith had already logged in nearly two dozen years rocking audiences from coast to coast and all over the world, along the way scoring a slew of classic rock tunes over eight albums and splitting up only to reunite a few years later with their 1985 album Done With Mirrors. Not only was that Aerosmith’s first release on their new label Geffen Records, but also their first sub-par release. With their second consecutive album failing to reach platinum status after six classic releases, it is easy to see how rock fans, and even the band, might have thought that Aerosmith’s star had burnt out.

No one could have imagined that just two years later, Aerosmith would release what many consider their true comeback album and in the process jump start a second chapter to an already legendary career. A second chapter that would produce five more huge albums over nearly 15 years — and it all pretty much started with the unexpected success of 1987’s Permanent Vacation.

With the mid-August release of first album single “Hangman Jury”, Aerosmith hardly came out swinging back with Permanent Vacation but follow-up single (and accompanying video) “Dude (Looks Like a Lady”) in October plastered the veteran band everywhere. Fans could catch music videos just as they were hitting the road creating a two-way promotional punch. The combo would re-launch Aerosmith into the rock and roll landscape making for the perfect foundation for singles “Angel” and “Rag Doll” to take off from. By the time the smoke had cleared, Aerosmith had collected awards for a top 20 album, three more top 20 singles, and one of the hottest multi-platinum releases of their legendary career. But while pop culture will always mark this period with mainly sounds and visions of “Angel” and “Dude (Looks Like a Lady)”, the honest truth is that as an album, Permanent Vacation is a blast of a record from start to finish.

Kicking things off with rocker “Heart’s Done Time”, the guy’s right off the bat show that while many had already written them off, they still possessed the rock swagger that influenced more than half the hot young bands that were ruling the rock world at the time. They also proved with just that first tune that they weren’t too old to show the young guns how to aim, fire, shoot, and kill. They spent the ’70s rocking and out drugging the rest of rock and roll… now they were set to out rock the new generation in the ’80s and the ’90s.

“Magic Touch” might have tossed a bit of a nod to ’80s rock but also reminded with a blistering solo why Joe Perry was not just Joe Perry but Joe Fuckin’ Perry — the low guitar slinging rocker who influenced the next generation of rock guitar legends. The guitar on the track just smokes and if it wasn’t enough that the guys showed that they could play with the new school, they whip out some old school slide jive right after with “Rag Doll”, a fun tune that only Aerosmith could have made work in the slick ’80s. At the time, anyone else trying to work in slide guitar into a track in the middle of the hot hair metal ’80s would have been committing career suicide. Aerosmith did it, had a hit, then all of a sudden later in 1988, Ratt release single “Way Cool, Jr”, Guns N’ Roses get a new leash on life as Appetite For Destruction (also released on Geffen) digs its way out of initial obscurity and bands like Tora Tora and more go on to inject hair metal with more blues-based influences than ever before.

While no one ever questioned Aerosmith’s serious love for music, “Dude” also proved that the boys from Boston could have a laugh as much as the next band by taking a poke at guyliner and hair spray. Eventually they would make the world laugh even more by slapping both on their old asses along the way.

Of course, the continuing theme within lies with Aerosmith tackling the present while still giving full respect to their roots with tracks like blues re-works “St. John” and “Hangman Jury” before throwing down into uptempo juke dance fun on “Girl Keeps Coming Apart.” If Aerosmith successfully did anything in the ’80s, it was mixing the best of rock, blues, and pop for a mix that was not only true and respectful, but easy for just about anybody to love. But if that wasn’t enough, the world was about to see that Aerosmith could pull what had become the hottest trick in the ’80s rock arsenal off better than anyone.

Clocking in over five minutes, “Angel” proved that the power ballad could be more than just the same three chords played in a three-minute radio format. With this one song, the wily vets proved that they could not only compete with songs influenced by their earlier hits like “Dream On” but still out do them. Yeah, Poison had “Every Rose”, but by songwriting standards, “Angel” was all that and more.

If it wasn’t enough that Aerosmith created an album that was every bit earlier Aerosmith smack with a renewed swagger for a whole new generation, they wrap the whole dang thing up with a calypso-laced title track, a blistering take on The Beatles‘ “I’m Down” and a rootsy instrumental closer. Out of the blues, Aerosmith went from near has been after thought to conquering vets by simply doing everything a rock band does better than anyone else.

It’s not that often that a band can kiss and makeup and end up with results that not only last longer than a hickie, but has more impact and sizzle. With Permanent Vacation, Tyler, Perry, and company not only pucker up, but leave a permanent sloppy, wet mark.

REMASTERED IN HD!Listen to more from Aerosmith: https://lnk.to/AeroBestOfExplore the incredible history of Aerosmith here: https://www.udiscovermusic.com/art…