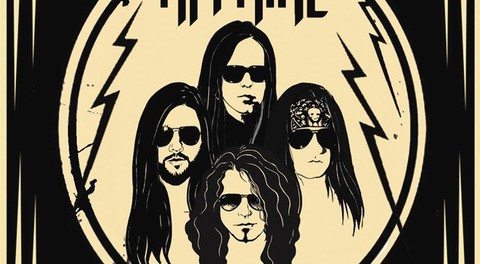 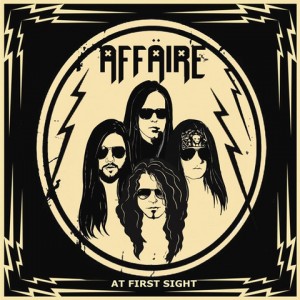 Review:
It’s always a good sign if within a few seconds, you know you are going to like a band. AFFÄIRE play the kind of ’80s friendly glam and/or sleaze metal music that is easily what I want to hear. It feels that the band is serving up my favourite comfort food with the guitar tuned just right.

Portuguese rockers, AFFÄIRE, are certainly not reinventing the wheel with their debut album At First Sight but at the same time, I am having a hard time coming up with the name of a band that they exactly sound like. A lot has to do with the vocal delivery of singer Dizzy Dice Mike whose voice sounds original, but yet I’ve heard his vocal style before. His singing works really well except when he slows it down such as at the beginning of the song “Seven Hounds, One Bone (Midnight Hunger)” but his vocals do sound a tad repetitive or one dimensional at times. Aside from the beginning of that song, I like every track on At First Sight. My one knock on the album is that I find that there is no standout memorable “hit” song. Nevertheless, a few tracks do stand out from the rest such as faster paced “Busted!” and the first four tracks including the riff based “Running In Quicksand.” AFFÄIRE do show that they are not just one trick ponies with the slower, organ like filled and bluesier song “No Room For Romance” showing that the band has some versatility and the potential to deliver a very different sounding album in the future.

Overall, AFFÄIRE‘s At First Sight is a solid debut album. For reasons that I can’t exactly pinpoint, I feel like the best is yet to come from these sleaze rockers so I am looking forward to hearing what they come up with in the future. You can purchase the album At First Sight in the U.S. via Demon Doll Records and in Europe directly from the band.