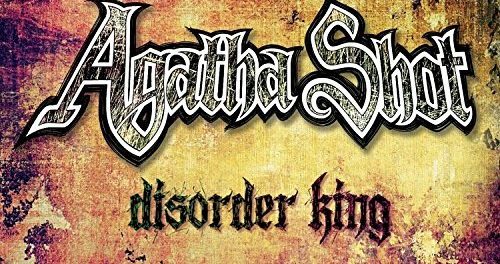 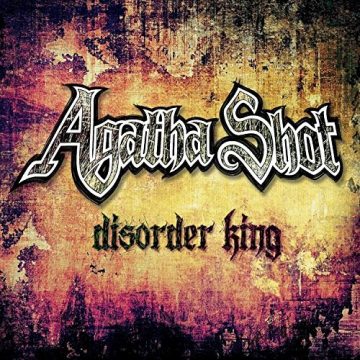 Review:
Appearances can be deceiving. Never judge a book by its cover. Nevertheless, here I was judging Agatha Disorder based on the front and back covers of their Disorder King EP. My first thought was “Geez, another death metal band sending a CD to Sleaze Roxx. Why do they keep doing that?” Despite the death metal / gothic like cover, I put the CD on for a spin and to my surprise, I instantly liked the first track. The other two not so much on a first listen but as time wore on, I have warmed up to the latter two songs and am now really digging Agatha Shot‘s Disorder King EP.

For the purposes of this review and since I must have lost the band’s info sheet, I did a little bit of digging to discover that Agatha Shot emanate from Germany and describe their brand of music as “metallized rock.” The group goes on to state that it knows how to unite sleaze rock, metal and punk elements with dark melancholic lyrics. I don’t hear a whole of punk in Agatha Shot‘s brand of music but there is definitely a lot of fine metal music coming from these guys with some sleaze elements. The first track “Lycanthro Junk” reminds me of Anvil in a big way with the verses while the bridge or chorus portion sounds a lot like Iron Maiden circa Brave New World era. The music has a real heaviness to it yet is pretty catchy. At first, I didn’t really like the bass solo — yes, bass solo — before the guitar solo but now it just adds to the charm of the first track with lots of nuances throughout. Even though lead vocalist Kai‘s singing often feels a bit dark, the background vocals add that needed melody and sleaze rock type feel to the first track. “Lycanthro Junk” is definitely a keeper and a song that I enjoy every time I hear it.

The title track “Disorder King” was the song that took the longest for me to warm up to. The intro sounds like mid ’90s Metallica before Kai‘s sinister vocals greet the listener. I think what I didn’t like about the song at first was its slower pace but it does have a cool heavy vibe to it and has a powerful chorus portion to boot. At least now I am not longing to skip it! Last but not least is “Streams Of None” which is probably the most melodic metal tune out of all the three tracks on the Disorder King EP. I got to say that it seems that Kai can sing over just about any type of music — fast paced, slow paced, melodic — it doesn’t matter as his voice carries the last track “Streams Of None” over its different tempos really well.

Agatha Shot‘s Disorder King EP is the surprise album of the year so far. You get three solid songs from an unknown band (to me). It seems that Agatha Shot can play many different genres and successfully blend them into their own version of “metallized rock.” All I know is that the band’s Disorder King EP will be getting a regular spin from me for the rest of the year and I am excited to see what the band will come up with next.

Agatha Shot‘s “Streams Of None” song: