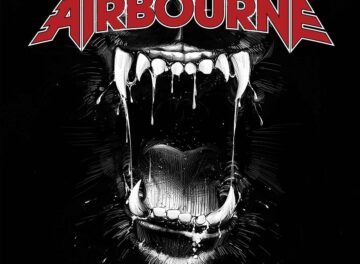 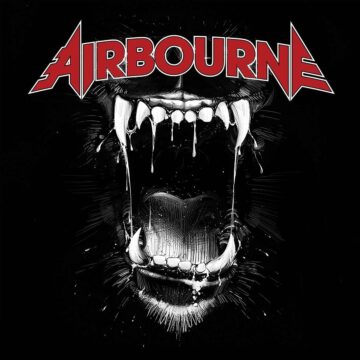 Review:
Keep it simple stupid… no one does that better than AC/DC and fellow Aussie rockers Airbourne, so why mess with a winning formula? If you know what works for you, there is no need to reinvent the wheel. With their third CD Black Dog Barking, Airbourne loyally follow the simple and bombastic formula that they carved with their first two stellar albums Runnin’ Wild and No Guts. No Glory.

There is no doubt that the AC/DC similarities can be heard throughout most of Black Dog Barking, but if you listen carefully Airbourne play their songs at a faster and more intense pace than the legendary rockers. Obviously, more and more people are picking up on Airbourne these days as their music is getting more and more mainstream. For instance, although I had previously heard the lead up single “Live It Up”, it recently started playing on the radio in the middle of the day. At first I thought this must be an AC/DC song that I have never heard, or have forgotten about, before realizing that it was Airbourne receiving the prime-time radio airplay.

Airbourne offer nothing original with Black Dog Barking, rather they deliver the same type of straight-up no-frills killer rock ‘n’ roll that you expect of them. Most songs on the regular CD clock in at under three and a half minutes — the only exceptions being the tailor made ready to play live song “Ready To Rock” with its ‘Ooooooh’ sing along portions and the first single “Live It Up”, which are the two best songs on the disc. Other standouts are “Hungry”, with its odd but cool Spanish like guitar overture, “Back To The Game” and “Black Dog Barking”. All of the songs on Black Dog Barking are good and, as expected, there are no ballads of any kind.

For just a few extra bucks, I highly recommend that you obtain the ‘Special Edition’ of Black Dog Barking. Not only do you get three extra bonus tracks, which could have easily found themselves on the regular edition of the CD, but you also get eight live tracks from Airbourne‘s show at Wacken Open Air back in 2011. Some bands would release such a CD as a separate ‘live’ album but Airbourne simply offer it as a bonus disc — kudos to the band for always trying and giving more than can be expected. The band’s live performance at Wacken Open Air is a good one and if you can catch these guys live, I recommend that you do so — they put on a great show.

The one knock on Black Dog Barking that I have has nothing to do with the songs themselves but with the CD booklet. The white and red printing over the black background is fine but why are most of the letters in such small print? The white typeface is barely readable even with the CD booklet two inches from my face and I could hardly make out what was printed when it came to the names of the band members. And why do the lyrics for each song start about halfway down the page? A message to Airbourne, or whoever decided on the booklet layout, start the printing at the top of the page and use bigger font size!

Putting this minor issue aside, Black Dog Barking continues the fine tradition of stellar Airbourne albums and I recommend it to anyone who likes straight-up AC/DC influenced rock ‘n roll played at a faster pace.