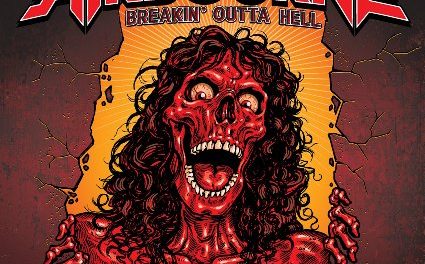 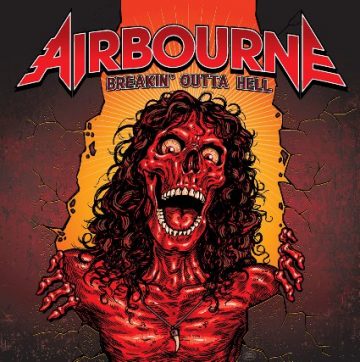 Review:
“No ballads. No bullshit.” — Well, that sounds very promising! Could Airbourne really deliver a fourth great album in a row? Judging from the two first songs that had been released — the title track “Breakin’ Outta Hell” and the first single/video “Rivalry” — Airbourne were poised to do it again, which is deliver an album full of AC/DC influenced down and dirty rockers that will have your head bopping in record time.

One listen to Breakin’ Outta Hell confirmed that Airbourne were indeed going to respect their credo of “No ballads. No bullshit.” Frankly, Breakin’ Outta Hell is everything that you would expect from Airbourne. The Aussie lads are not out there to reinvent the wheel on their fourth album and simply deliver another slab of fist pumping, go for the throat, easy to enjoy rockers. You’ve got the faster tracks such as “Breakin’ Outta Hell.” You have the sing along song with the “Oooh. Oooh. Oooh.” portions contained in the first single “Rivarly.” You have the rock n’ roll anthem in “It’s All For Rock N’ Roll.” You’ve got the apparent feel and homage to Bon Scott era AC/DC during the intro verses of “I’m Going To Hell For This.” You’ve got a more bluesy like tune with “Thin The Blood.” In a nutshell, all of the songs on Breakin’ Outta Hell are good ones with some falling into the great category such as the album closer “It’s All For Rock N’ Roll” and the faster paced title track “Breakin’ Outta Hell.”

Sometimes, all you can say is “thank you.” Thank you Airbourne for not compromising and delivering once again an amazing record full of kick ass, head banging, fist pumping, adrenaline filled rockers.