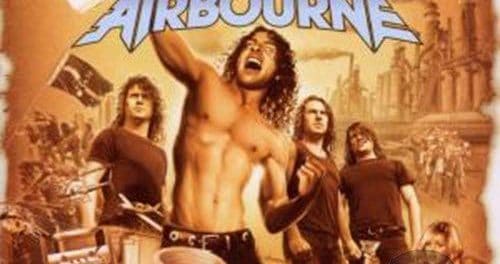 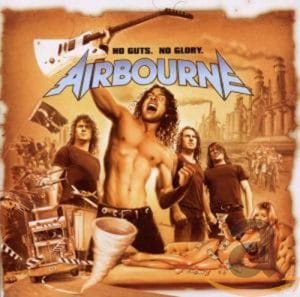 AIRBOURNE
NO GUTS, NO GLORY
Released on March 8, 2010 (Roadrunner Records)

Review:
For sleaze fans, the second full-length album from Airbourne may be the most anticipated release of the year. It’s been roughly three years since these hard rockin’ Aussie’s first started making major waves with Runnin’ Wild. It took some time, and a couple setbacks, but eventually the entire rock community began to embrace them.

Now that everyone has previously heard Airbourne the element of surprise has vanished, meaning it will be that much harder for the band to match the excitement of their debut. So what does Airbourne do? The same thing their most obvious influence AC/DC does, stick to the exact same formula that drove them to success. Because of that No Guts No Glory and Runnin’ Wild are almost interchangeable, catering to the blue-collar working man who earns a living from his own blood and sweat. The type of men that work hard and play even harder… Airbourne create the soundtrack to their lifestyle.

Of course Airbourne are never going to shake the AC/DC comparisons, despite being faster, heavier and meaner than they ever were. If you must draw parallels, think Flick Of The Switch taken to ear-shattering extremes. The four members of Airbourne play their instruments as if they are exacting revenge for some childhood trauma they caused, furiously strumming the guitars while trying to smash their fists through the drum heads. It is that unbridled aggression that makes anthems such as “Born To Kill”, “Blonde, Bad And Beautiful”, “Raise The Flag”, “It Ain’t Over Till It’s Over” and “Back On The Bottle” head-banging classics. Each of those songs are perfectly suited to become staples in Airbourne‘s live fist-waving setlist for years to come.

Airbourne hasn’t brought anything new to the table with No Guts No Glory, but it delivers exactly what we want and expect. It is the musical equivalent of a guy so infatuated with a woman he wants to screw her brains out, only in this case Airbourne bashes our brains in with unrelenting hard rock.