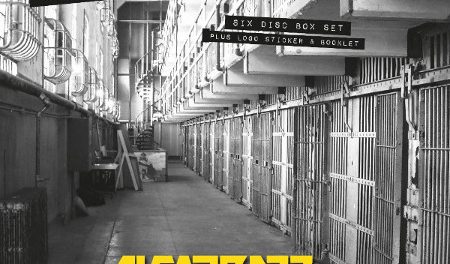 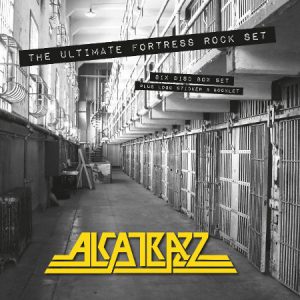 Review:
If you’re a regular reader of the site, I don’t have to explain much about Alcatrazz; but I will because I can’t assume everyone is more than a casual rock fan. Alcatrazz was formed by singer Graham Bonnet after his departure from the Michael Schenker Group. Bonnet recorded Assault Attack (1982) with Schenker before being asked to exit shortly thereafter. Bonnet had already worked with Ritchie Blackmore’s Rainbow on 1979’s Down To Earth before moving on from that band.

In 1983, Bonnet along with keyboardist Jimmy Waldo and bassist Gary Shea formed Alcatrazz and enlisted guitarist budding Yngwie Malmsteen who had recently split from the Mike Varney act Steeler (which featured Ron Keel). Alcatrazz was launched with the release of their debut album No Parole From Rock ‘N’ Roll which anchors the six disc set The Ultimate Fortress Rock Set. With tracks like “Island In The Sun,” “General Hospital,” Jet To Jet,” “Hiroshima Mon Amour,” “Big Foot,” and “Starcarr Lane,” the debut is an instant underground classic. The version in this set also includes ten demos of the songs that would make it onto the debut album. Don’t expect clear, bombastic sound quality here. They are bootleg quality at best; though I must say that they are not as terrible sonically as I expected.

Also included is the live record Live Sentence which was recorded in Tokyo, Japan in 1983, which showcases the band’s chemistry live in front of an enthusiastic Japanese audience. The DVD [disc six] also includes the video of the Live Sentence album as well as the performance ten months later in October of 1984 in Tokyo, Japan with Steve Vai. Obviously, these two shows can’t compete with today’s DVDs but you get a snapshot of two of this generation’s virtuosos in their early beginnings — in the same band at that.

Disturbing The Peace is underrated  in comparison to the Yngwie album. The record was issued in 1985 and was produced by Eddie Kramer (Jimi Hendrix, KISS). The album features the single and video “God Blessed Video.” The album went virtually ignored and before you knew it, Steve Vai split to work with David Lee Roth on Eat ‘Em And Smile, which went on to sell millions. Disturbing The Peace appears in expanded form with the original album along with two bonus cuts from Tomorrow’s Outlook featuring Bonnet on vocals. Those tracks are out of place as is an Alcatrazz interview from 1983.

Having lost both Yngwie and Vai and then watching each of them move on to bigger and better things must have been disheartening for Bonnet; but he persevered. Alcatrazz resurfaced in 1986 with new guitarist Danny Johnson and a new album Dangerous Games. Alcatrazz retained Wendy Dio as manager and the band hoped to finally get their big break. Alcatrazz took a slight turn in direction from their previous efforts on that album. The record in short wasn’t very good and by that point, any or all interest in the band stateside had dissipated. Dangerous Games (disc four) in this set features three bonus tracks that aren’t Alcatrazz songs but do feature Bonnet on vocals.

Alcatrazz & The Graham Bonnet Band [disc five] features a performance with Yngwie Malmsteen from The Country Club, recorded in California in 1983. Pure gold, much like the Live Sentence album. In addition, the disc features six additional tracks (Escape from Alcatrazz) recorded live by Bonnet’s solo band in Japan (in June 2015). Good stuff all around on this disc for the diehard Yngwie and Bonnet fanatics.

In the end, there are two types of people who will appreciate The Ultimate Fortress Rock Set enough to purchase it; the Yngwie/Vai geeks or the Bonnet fans. Anyone else will likely look at this on an online store or record store and keep walking. It’s a shame that Alcatrazz went to bat three times with two different virtuosos and then with a ‘good’ guitarist and struck out all three times. It simply wasn’t meant to be. Ironically, the label that issued the No Parole From Rock ‘N’ Roll and Live Sentence was Grand Slamm Records. You have got to see the humor in that with the aforementioned records being the jewels in this collection.

Alcatrazz – Island in the Sun

Live version of the track Island in the Sun from Japan in ’84. Yngwie is awesome – Graham Bonnet is not really at his best.