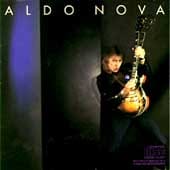 Review:
Canadian rocker Aldo Nova became a household name with his debut disc. The album shot into the Billboard Top Ten backed by the success of the exceptional single “Fantasy” (#23) and, to a lesser extent, “Foolin’ Yourself” (#65). Other killer tunes include “Hot Love”, “Under The Gun” and the sensitive “Ball And Chain”.

It’s interesting to note that Aldo played a lot of different instruments on this album, as he laced it with layers of keyboards and guitars. Aldo Nova showed how multi-talented he was, as he could sing, play numerous instruments and write good tunes (as he has shown in later years by collaborating with his friend Jon Bon Jovi). I hope one day he comes back into the public’s view and releases new material, he has so much talent and it would be a shame to waste it. Aldo Nova‘s debut gets two thumbs up!