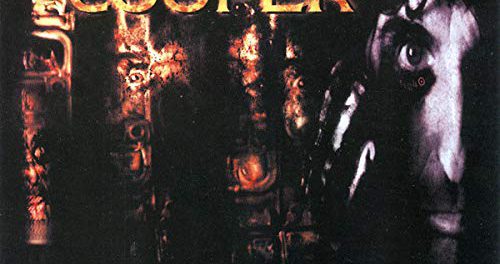 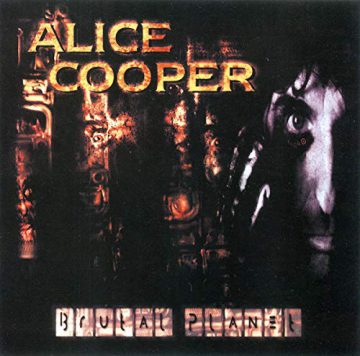 Review:
Six years since his last studio album, Alice Cooper attacked the millennium with an angry, heavy attitude in his concept album Brutal Planet, tackling several current events, while delivering some of his best musical work. The approach of the album, according to interviews by Cooper, was to  create a world where everything has failed humanity; from schools, religion, technology, and politics. He also states that in this world there is no God, and it has become a place that nobody would want to be living in. With help from Bob Marlette, Cooper brings a quality band to help him out, including Ryan Roxie and KISS drummer Eric Singer.

The title track opens the album, welcoming the listener to a heavy, dark, and savage world filled with hate, backstabbing, and evil. Cooper compares the planet similar to the demise of The Garden of Eden, where the serpent helped cause the fall of man, calling the place a “ball of hate,” while the powerful guitars and drums carry the song. Guest vocalist Natalie Delaney sings the chorus, seducing the listener, similar to a temptress and her prey. This is a wonderful, massive track to open the album.

“Wicked Young Man” was inspired by school shootings such as Columbine. Alice takes the listener into the mind of the shooter, where on the planet, things like this would happen everyday. Alice makes a statement that some people are just evil, and not due to the influences of video games, movies, or music. On Brutal Planet, evil is everywhere. The chugging guitars keep the hard edge to the album, like the title track, along with adding some programming similar to what Rob Zombie‘s music would entail.

The vocals on “Sanctuary” are part spoken on the verses, and sung on the chorus. The guitar work here (I’m guessing it is Roxie playing, although it does not say in the liner notes who played on what) screams throughout the track. The song also shies away from the typical verses having a rhyme to it. The character praises his room in his house, which is his escape from the terrors outside in the created world. This is not the peaceful Brian Wilson refuge from the outside world, where there is still love and sunshine, but more a violent world that continues since the opener.

The next track, “Blow Me A Kiss,” has a Rob Zombie style again to the song, more so than the previous songs. This is another song may be influenced by school shootings, and looks at the fear involved of the victims. The bass on the song is heard more than on others, with Marlette playing a nice groove.

“Eat Some More” tackles the economic gap between the richer people in his world and those without enough food to eat. This may be Cooper‘s most political album, creating a fictional world and discussing the evils in it, but the Brutal Planet themes aren’t considered  fiction and, to some extent still, are still happening today. This song has a slower, darker mood than the other songs, and seems to be influenced by Black Sabbath musically. The drumming is comfortable for Eric Singer, who played for Sabbath at one time. The guitar work in the background needs special attention for its added layer to the song. This also does not have the normal verse/chorus/verse structure, where the title is only mentioned at the end of the chorus.

On the planet, death is everywhere, and Cooper uses this theme to visit on the slower “Pick Up The Bones.” This may be one of Cooper‘s most disturbing songs ever, where the character is picking up bones and parts of his family members after the massive death, almost like a holocaust situation. Even though the song is still dreary, this is the first ballad-like song, after five songs of massive intensity. The character, at the end of the track, gives the listener a chance of hope, where someday life could grow on the planet, but then quickly snaps him back to the reality that that this is Brutal Planet and not a happily ever after.

Some have stated that this album is more of an industrial or grunge style of music. I’m not sure about labels, but for this review, I will say if there is a song that is along the grunge format, “Pessi-Mystic” is the best song for that description. The song has an instrumental into, almost a throwback to “Welcome To My Nightmare.” There are breaks throughout the song, shying away from the normal straight beat drive of the songs, and the guitar solo brings power to the song.

Programming starts off “Gimmie,” a song where the listener meets the character who is almost a Satan-like creature, or maybe the leader of Brutal Planet. This person asks the listener whatever their desires are, he can make them come true, either fame, fortune, or anything else. One could argue that there are many religious references throughout the album, which isn’t surprising due to Cooper‘s Christianity stance, but the CD still is heavy and full of rock power. I never knew there was a music video for this song, until I was doing research for this review. In the video, Alice sits on a throne promising several teens dressed up in Goth clothing whatever they want, he can make happen. At the end, the group of musicians he seduces becomes a boy band, but it doesn’t last long (no spoilers here). This song starts to lead the listener to a less heavy and death-like theme than during the beginning songs on the CD.

Even though this album has a serious, dysfunctional created world, Cooper adds his signature humor to the album, with “It’s The Little Things.” The character describes how he has so much anger built up that he may snap at any time. While this may not sound humorous, it is here when he states you can beat him up or make him do things he doesn’t not want to out of force, but do not talk during his movie at the theater (or ask him how he got his name, which is a great jab from the Alice character, the guy with the “woman’s” name). There are also references to the song “Welcome To My Nightmare” and “No More Mr. Nice Guy” on the song.  Although the song is still heavy, it has the standard Alice tongue and cheek lyrics to it. Check out the live version of the song from his Brutally Live DVD for more humor, especially at the beginning, which was a VHS tape I wore out playing so many times, due to my love of this line-up of the band, and the songs on this release.

Another throwback to Cooper‘s past success is heard on “Take It Like A Woman,” a song similar to his hit “Only Women Bleed,” but more graphic lyrically. The blues guitar on this track (once again, I’m guessing it’s Ryan Roxie on it) is nice, and this is the most radio friendly song on the album, with its production that 1980s era Cooper fans would enjoy. But since this is Brutal Planet, the female in the song keeps repeating the same mistakes over and over, which still keeps the overall theme consistent.

The final track, “Cold Machines” is the most like a Marilyn Manson song in style and rhythm. A heavy ender to the album, completes the CD as a whole, with starting and ending with power and force. The lyrics describe mindless people walking to and from their lives as zombie like robots (where machines seem to come in), just going about their business with no thought or humanity to them. This song almost has a George Orwell style to the writing, reminding the listener about this planet that is full of evil and greed, but the people just go about their day to day activities. This is science fiction poetry here in the lyrics that is the bases of many Hollywood films in the past ten years or so, of the destroyed society.

Much like the Welcome To My Nightmare album, I think listening to the whole Brutal Planet CD is best to appreciate the intricate story building that Cooper and Marlette create. Not only is this filled with wonderful musicians, but Alice Cooper creates a dystopian world that, although seems fictional, the lessons are still relevant in today’s society, and not just for the year 2000. Cooper charged into the new millennium with a story of power, destruction, greed, and evil, while creating songs with solid, massive drumming and screaming guitars that could be placed alongside any of the harder albums of the year. I still play this CD today , and love pretty much all the tracks.

Call it what you want — industrial, metal, or hard rock — Cooper and the gang rocks not only on earth, but the other planets as well, no matter how evil those places are.