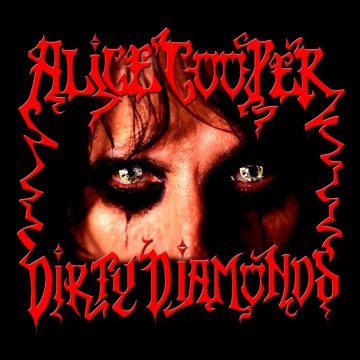 Review:
Some of my favorite Alice Cooper CDs are from the 2000-2005 years. The band members at the time, which included Eric Singer, Ryan Roxie, and Chuck Garric are some of the underrated  and underappreciated times in Cooper‘s career. Alice always got quality musicians throughout the years either live or in the studio. Many of the songs from this era (with the exception of 2000’s Brutal Planet) were a throwback to a garage band sound, with limited production and a stripped down rock and roll sound. 2005’s Dirty Diamonds continued that format for the most part.

Opening with the track “Woman of Mass Distraction,” the album kicks off  hard with an AC/DC style groove to the song. Lyrically, the traditional Alice tone is here; the character meets his match after years of treating women the way he wanted to, with a touch of humor in the lyrics as well, with a line like “She hooked me/she cooked me/she practically filleted me.”

One of my all time favorite Alice songs is “Perfect.” This track has a Rolling Stones blues/rock choppy groove to it during the verses, about a girl who thinks she’s a superstar in her home, but when she goes to the karaoke club, her singing is awful, along with her dancing. The pop culture theme of every person becoming, or wanting to become a star (though lacking actual talent), shows how Cooper always had his writing style on the current events of the world (and is still relatable today with teens and young adults wanting to be social media stars, or the bombardment of reality competition shows). The song’s sleaze rock feel makes the track almost a pop track, and should’ve been on rock radio. Cooper sings on the track, instead of using his angry gritty style that he is known for. The ad-libs at the end of the track by encouraging the girl to dance, and saying humorous lines like “that’s awful, that’s bad” just gives an extra part to the song.

“You Make Me Wanna” goes back to the groveling vocal style of Cooper, with its infectious chorus. Even though the chorus is simple, it works here and is catchy to sing along with. This is another track that has a Rolling Stones influence. Even though many know Cooper and his band for the stage shows, this song showcases a well written rock song, with wonderful hooks. “Dirty Diamonds” opens with a trumpet, flute, and saxophone musical instrumental which shows the theme of an classic crime movie. Once the song kicks into a more rocking style, it has a throwback to the ’70s Cooper format lyrically, but without sounding dated. The first three tracks deal with relationships and women, but here the theme of crimes, gangsters, and the FBI are featured. The musical melody of the song is very similar to Black Sabbath‘s “Paranoid,” especially at the end.

“The Saga of Jesse Jane” is a country track with a touch of a spaghetti Western guitar fill throughout. Lyrically the song is about a cross-dressing truck driver who stumbles into a town and gets himself jailed. He is wearing his sister’s “wedding gown” and sings “Judy Garland” songs. I remember reading a few interviews at the time of the CD release, where Cooper wanted to send the track to country music radio under another name to see if it could get played in jukeboxes. Cooper seems to try and channel Johnny Cash on this track. Once again, he sings on here, without his angry style, which shows some of his skills as a vocalist, while combining the humor flavored lyrics without being cheesy, written by Cooper and guitarist Ryan Roxie.

“Sunset Babies (All Got Rabies)” is a fun track that shows a lyrical salute to the 80’s hard rock club scene down on The Sunset Strip.  I really enjoy some of the tracks from this era, especially with Ryan Roxie and other guitar player Damon Johnson playing on the songs, who are vastly underrated as players and songwriters. The clean guitars provide another Stones-influenced style. It is a basic, but a fun song to hear. This is a track Cooper played on many late night shows to promote the CD, and is a shame this isn’t mentioned more often when talked about Cooper‘s great tracks. This is a song that can get the party started.

It’s not often that Cooper records cover songs on his albums. “Pretty Ballerina” is a cover of the 1966 song by The Left Banke, and fits well with the overall style on the album. This is very mellow song, and is not far off from the “Welcome To My Nightmare” songs that may have been on that album. This would have been good to see live, with his daughter and wife being used in his stage shows as dancers. This song, to me, is better than the original version.

The next two tracks, “Run Down The Devil” and “Steal That Car” are similar (somewhat) in lyrical style, which makes me wonder why the two were not only placed on the album, but back to back. “Run Down The Devil” possibly shows Cooper‘s Christianity without being forceful, in the fact that the character in the song wants to run Satan over in his car. It’s a simple concept over all, and isn’t one of the better tracks on here.

“Steal That Car” is a better track in choosing from the two. This track talks about various types of cars, and to me, is a salute to Michigan, which is known for the automobile factories. Since Cooper is from Michigan, the listener can see the similarities in musical style and lyrics. I, personally, would have kept “Steal That Car” and left off “Run Down The Devil.” “Steal That Car” has enjoyable guitar work throughout. The opening section, where the drums accent the song until kicking into the normal beat, reminds me of the opening of Sammy Hagar‘s “I’ve Done Everything For You,” which was also a hit for Rick Springfield.

“Six Hours” is another mellow song, that has a southern rock/blues format to it. The guitar fills at the beginning sounds a lot like Lynyrd Skynyrd‘s “Tuesday’s Gone” opening. Again, Alice‘s vocal, where he just sings, tends to be overlooked, where is known usually for an angry style. “Your Own Worst Enemy” is another weak song for me, in lyrical content, but does have some humorous parts to it. This is one I usually skip over.

The last track (unless you have the CD with the bonus track on it), “Zombie Dance” fits well with the Cooper format. What better image to have on an Alice CD than zombies and voodoo? This creeping song would (again) fit in with the ’70s Alice songs, and the added percussion and backing vocals (by Peggi Blu and Edna Wright) add to the mysterious vibe. This has a swampy tone to it, not as strong as a John Fogerty song, but it still adds a horror vibe to it. This is a great way to end the album.

The bonus track is called “Stand,” which features the rapper Xzibit. If the rap parts were taken out, I would like the song more, which has some positive lyrics to it (again, Cooper‘s Christianity in play here?), with the chorus stating “If you don’t stand for something/ You’ll fall for anything.” Being a Christian myself, I like the lyrical content, but I can see why this song is a bonus track, because it doesn’t fit with the overall flow of the CD, and I personally do not like rap at all (I can count on one hand rap songs I like), so it does nothing for me.

As mentioned earlier, this era of Alice Cooper has some of my favorite work on it. The lyrics and great musicianship throughout the CD by Ryan Roxie, Chuck Garric, Damon Johnson, and drummer Tommy Clufetos (and some many other added  musicians to help) makes the album vastly underrated  (for some odd reason, Eric Singer is featured in the photos, yet doesn’t play on the album). The solid rock style of Dirty Diamonds shows that Alice Cooper was not just all theatrics, and produces some quality, enjoyable music that some fans may be aware of, which is a shame because there are some gems on here.