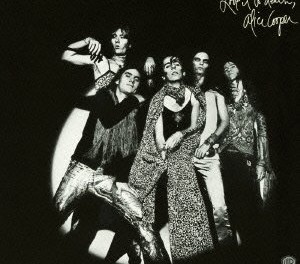 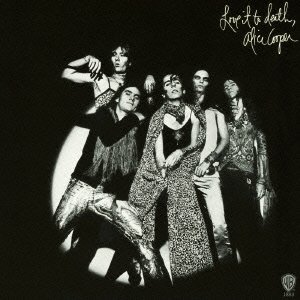 Review:
It’s hard to believe that forty five years have passed since the release of Alice Cooper‘s classic album Love It To Death. I probably only “discovered” Love It To Death 16 or 17 years after its release and almost 30 years later, the album still rocks and is one of my favorites from the legendary shock rocker Alice Cooper aka Vincent Furnier. Sure, the production and sound are definitely quite a bit dated but the great melodies and emotions conveyed by Alice Cooper and company still shine through the album forty five years later.

What makes Love It To Death so astonishing is that it followed two of the most lacklustre albums ever made by Alice Cooper, let alone any performer. I still to this day can’t listen to Pretties For You or Easy Action, which I can only describe as terrible. There’s a reason why the songs on those two albums were never played live past the tour in support of Love It To Death! To have the Alice Cooper band — because they were a band at that point —  follow up those two albums with a mostly killer album (except two songs — more on that later) is really an exceptional effort and proof that any band can turn it around with the right guidance (i.e. likely Bob Ezrin in this case). Of course, Alice Cooper and company went on to release three other mainly phenomenal records in School’s Out, Killer and Billion Dollar Babies. But Love It To Death is the catalyst or the fork in the road where the Alice Cooper band started coming up with amazing music that is still relevant almost a half century later.

What I have always loved about Love It To Death is that it is much more than a straight forward rock album and there are layers upon layers of complexity and different arrangements to the songs that really add to the mood of the album. There’s no question that the songs from Love It To Death that are still being played by Alice Cooper in a live setting such as “I’m Eighteen” and occasionally “The Ballad Of Dwight Fry” sound a lot better live than they do on an album dating back 45 years but the genesis and brilliance of the songs still shine through on the album. The fantastic one-two-three punch of “Caught In A Dream”, “I’m Eighteen” and “Long Way To Go” always sucks me into listening to the entire album and note for note, those three songs could go head to head with any three opening tracks from any other classic album. Those three tracks are that good!

Where Love It To Death has always gone awry for me is the almost ten minute long “Black Juju” which takes the experimentation to uncomfortable and needless levels. Sadly, the track feels very long and is an unwelcome break until the Alice Cooper band ramps up again with the triple knockout punch  of “Hallowed Be Thy Name”, “Second Coming” and “Ballad Of Dwight Fry.” “Is It My Body” is a solid track as well. While “Black Juju” is tolerable, the closing track of “Sun Arise” — a cover song at that — is terrible, does not fit in with rest of the songs and in my eyes prevents Love It To Death from getting its just due as one of the greatest albums of all-time.

Love It To Death is the first album that I ever review which actually predates my time on this earth and my hope is that this review pushes younger Sleaze Roxx readers, that have yet to hear this classic album in its entirety, to give it a chance. I suspect that most people will be familiar with “I’m Eighteen” but there are some even better songs on Love It To Death that are definitely worth exploring, checking out and ultimately enjoying for many years to come. Love It To Death is the kind of classic album that will still be relevant in another twenty five years from now.