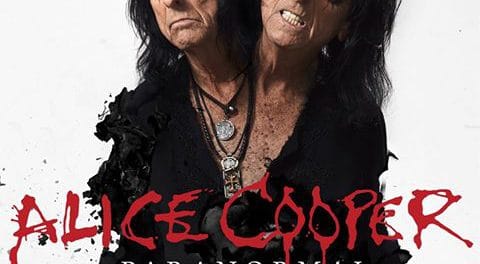 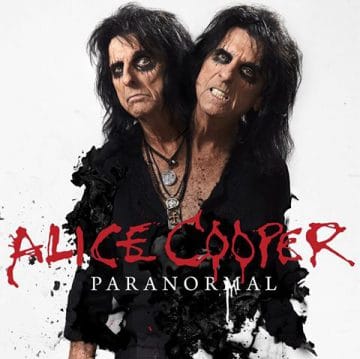 Review:
Unlike many of his contemporaries, Alice Cooper continues to release new material for his fans to enjoy regardless of whether his new records sell a lot of copies or chart on Billboard. With such a vast back catalog of material and classic songs, he could easily be forgiven for simply taking the easy road by continually playing the songs fans already know and love for the rest of his career. But that’s not how Alice Cooper works. Unlike many of his peers who complain that no one is buying new records, or that fans just want to hear the old stuff, he chooses to continually challenge himself, remaining creative and enjoying what he is doing.

So here we are in 2017 and Alice Cooper has just released his 27th album of original material titled Paranormal. Whilst I have always been a big Alice Cooper fan and have enjoyed all of his prior releases, Paranormal in my opinion is one of his better albums of what I consider to be his ‘modern era’ (post ’70s). I probably haven’t enjoyed an album this much in its entirety since the underrated The Last Temptation released in 1994.

Paranormal kicks off with the title track and an eerie guitar arpeggio, which has a sound reminiscent to the Welcome To My Nightmare days. A few short bursts of wailing guitar later and Alice’s vocals enter the proceedings to provide their own eerie melodrama. The song twists and turns between being a haunting melody during the verses to a rocker during the choruses. A change of riff prior to the smoking guitar solo provides an extra boost to the song’s intensity.

Up next we have “Dead Flies” which continues Alice Cooper’s trademark tongue in cheek lyrical content, which flows throughout the album. The highlight of this talent is the album’s third song “Fireball” which is absolutely terrific musically and lyrically. I love it when lyrics revolve around a story scenario and I especially love it when there is a twist at the end. Not to give things away, but this song is about a fireball that is headed for earth and it absolutely rocks. “Paranoiac Personality” follows and was the first taste we got of the new album via an official YouTube song stream (see below). When I thought the song “Paranormal” sounded like something from the Welcome To My Nightmare era, “Paranoiac Personality” ups the ante and really gives off a vintage Alice Cooper vibe. “Fallen In Love,” “Dynamite Road” and “Private Public Breakdown” are up next and are all short solid rockers.

We then come to “Holy Water” which is very jazz inspired with the inclusion of horn sections and drum stick tapping. Once again, the song is in and out before you know it, like many of the songs on Paranormal and I wish they would have extended the arrangement or maybe took it in another direction momentarily. Herein lies the only issue I have with the album — a lot of the songs are way too short. After “Fireball,” the longest track on the album clocks in at 4:49 and we have progressed through five songs for a total run time of approximately 16 minutes. I understand that there is a fine line between having a song overstay its welcome and being too short. However, the majority of these songs are quite enjoyable and they had the potential to be longer without crossing that line. Often when you are really getting into a song, it will abruptly end, which is a little frustrating. Matters are not improved with the next song “Rats” which runs for 2:38. However in “Rats” defense, it is primarily a blues scale song and the time frame is suitably justified.

The album is closed off by “The Sound Of A” which is hypnotically soothing and has an epic type feel. Once again, there is a definite old school Alice Cooper vibe coming from this song with the rumbling bass being the driving force, backed up by some nice guitar melodies and serene vocals.

But wait, there is more. Paranormal is a two disc release. In addition to the ten songs on disc one, disc two provides us with an additional two studio tracks — “Genuine American Girl” and “You And All Of Your Friends” — and six live tracks. “Genuine American Girl” is quite catchy and continues the rock where the first disc left off despite the ludicrousness of Alice Cooper singing that he is a “Genuine American Girl.” There are also some nice chanting backing vocals during the chorus similar to something from the ’60s. “You And All Of Your Friends” is another short song but a good one nonetheless. It suitably feels like a closing song because of the constant lyrical reference to the word ‘end’ however deep down, I get the feeling it is a politically motivated song about anarchy and rebelling against your oppressors.

The remaining songs on disc two are live tracks performed in Columbus, Ohio, USA on May 6, 2016. They are basically some of the classic songs from the ’70s that all fans would expect to hear at an Alice Cooper concert, except for “Feed My Frankenstein” which was from 1991. For this reason, I think that “Feed My Frankenstein” is out of place and not that great a song to begin with. With the amount of material in the back catalog, it should have been replaced with something better like “Department Of Youth.”

Overall Paranormal is a fusion of the styles Alice Cooper has experimented with over the decades; however, it is far from being classified as a career retrospective. Whether you are a fan of the ’70s or ’80s Alice Cooper, Paranormal will definitely have something that will appeal to you. Vocally, the Alice Cooper of today still sounds just like he did back in the ’70s, which is miraculous considering he is almost 70. And to still be performing like he does, when many of his peers have fallen by the wayside, is a real testament to his hard work and perseverance.

I’ve got my ticket to see Alice Cooper for the fourth time when he hits Australia in October. Even though he is getting old, the show and music never will.

Leading up to the release of Alice Cooper’s upcoming studio album in two weeks, the legendary shock rocker reveals the album’s title track today.The song is …