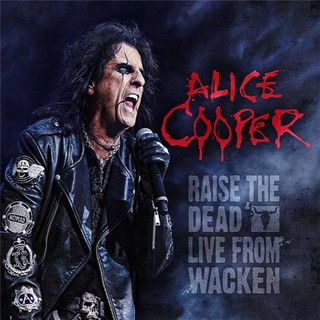 Review:
As is usually the case with artists that have been around for a few decades, you start getting more and more live and greatest hits releases. Alice Cooper is no stranger in that department, having released numerous compilation albums and live discs in the last 15 years. While I am assuming that Alice Cooper is nearing the end of his musical career, given that he is already 66 years old, I am secretly hoping that the shock-rocker will be playing music for another 20 years since his live performances are still phenomenal (read my review of Alice Cooper opening for Motley Crue this summer here) and he appears to have plenty of gas left in the tank.

So why pick up Alice Cooper‘s latest live CD/DVD release Raise The Dead: Live From Wacken? That is what I pondered as I checked out the track listing for the release. After a quick glance at the set list, the decision was a very easy one as Raise The Dead Live felt like a must own release — quite frankly, because the song selection is very enticing. You have of course all of the trademark hits such as “No More Mr. Nice Guy”, “Under My Wheels”, “I’m Eighteen”, “Billion Dollar Babies” and “School’s Out”, but you also have songs such as the easy sing along “House Of Fire”, the comeback track “He’s Back (The Man Behind The Mask)” and the newer “Caffeine” — that have never made their way onto any Alice Cooper live release in the past.

The song variety on Alice Cooper‘s various live releases is a true testament to the large amount of great songs that he has released over the last five decades. For instance, only ten of the 22 songs 2011’s No More Mr. Nice Guy: Live, and fifteen of the 25 tracks on Theatre Of Death: Live at Hammersmith 2009, can be found on Raise The Dead: Live From Wacken.

It’s good that this release comes in both DVD and CD formats because I find that no CD will really do justice to an Alice Cooper concert — and the Raise The Dead: Live From Wacken discs are no exception. An Alice Cooper performance encompasses sonic and visual stimulation, and watching this DVD really makes the songs come alive. With the sun starting to set, Alice Cooper opens the show with “Hello Hooray”, which I have always found to be a rather meek opening track for a man who has so many great songs to choose from. As soon as the shock-rocker kicks into the second song “House Of Fire”, it is like the whole audience wakes up as you can see a sea of hands clapping along to the song. From then on, Alice Cooper and his band seem to have the large audience in the palm of their hands. It is also cool to see guitarists Orianthi, Ryan Roxie and Tommy Henriksen trading guitar solos on some of the tracks, including “Under My Wheels”. The contrast between the DVD and CD is most evident when the drum solo comes on during “Dirty Diamonds” — while on the CD it almost ruins one of my favorite “newer” Alice Cooper tracks, it becomes tolerable while viewing it on the DVD.

The gems on Raise The Dead: Live From Wacken are the four cover songs that Alice Cooper and his band play towards the end of the show. Four classics including The Doors‘ “Break On Through”, Jimi Hendrix‘s “Foxy Lady” and The Who‘s “My Generation” get the Alice Cooper treatment, but sadly, the DVD only includes two of the four covers. If those tracks don’t get you excited about Alice Cooper‘s upcoming covers album, nothing will.

Just like a fine wine, Alice Cooper‘s live performances keep getting better with age and Raise The Dead: Live From Wacken keeps that trend going.