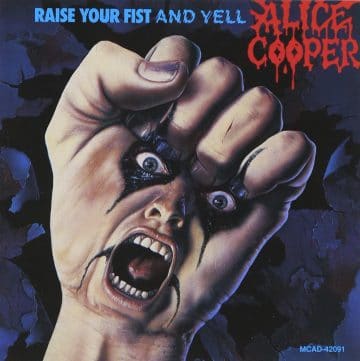 Review:
One of the most underrated albums for me has to be Alice Cooper‘s Raise Your Fist And Yell album released exactly 30 years ago yesterday. It’s easily in my top three Alice albums with Love It To Death and School’s Out. I readily concede that Raise Your Fist And Yell has a lot of sentimental value for me. Although I may have discovered Alice Cooper with his comeback album Constrictor and the single “He’s Back (The Man Behind The Mask)”, it wasn’t until Raise Your Fist And Yell that I became a full fledged Alice fan going back deep into his discography. Well, not that deep as I have never been able to embrace Pretties For You (1969) or Easy Action (1970). It was also the first time that I went to see Alice Cooper live (with the mighty and loud Mötorhead opening) and I believe only my fifth concert after Judas Priest (with Bon Jovi opening), Mötley Crüe (with Whitesnake opening), Shock (I know — you’re probably thinking who the heck is that band?) and Lee Aaron.

Why do I think Raise Your Fist And Yell is underrated you may ask? It has to do with the man himself pretty much snubbing that album after touring behind it. According to Wikipedia, after playing a healthy sampling live from Raise Your Fist And Yell to the tune of five songs (“Freedom,” “Prince Of Darkness,” “Chop, Chop, Chop,” “Gail” and “Roses On White Lace”) during the Live In The Flesh tour in support of the album, none of the songs from Raise Your Fist And Yell were ever played live again. If you ask me, that’s a real shame. The opening track “Freedom” should have been a concert staple for the shock rocker for the rest of his music career. It has everything you would want in an anthem including engaging verses, a strong and easy main chorus portion (“Freedom!”) and some cool guitar licks from behemoth Kane Roberts. That song alone should have keep Raise Your Fist And Yell on Alice Cooper‘s radar for many many years after the record’s release.

But the great songs don’t stop there. “Lock Me Up” will have you singing along in a heartbeat. “Give The Radio Back” is a cool almost pop like anthem. “Step On You” took some time to get used to but I now I thoroughly enjoy the song every time that I hear it.  One of the hidden gems on Raise Your Fist And Yell is the track “Time To Kill” which regrettably was never released as a single but is powerful yet easy to sing along to. “Not That Kind Of Love” is another easy to sing along tune while “Prince Of Darkness” is a deeper cut with a little more substance than what is found on Raise Your Fist And Yell. The album finishes with a classic Alice Cooper trio of the cheesy (but it works) “Chop, Chop, Chop,” the “ballad” “Gail” (the “Steven” equivalent on the album) and the hard hitting “Roses On White Lace.”

Sadly, Raise Your Fist And Yell would be the last album featuring the partnership of Cooper and guitarist Kane Roberts who helped write most of the songs on the record. While Trash was a very good album, I find that Alice Cooper never reached the heights that he attained on Raise Your Fist And Yell with the possible exceptions of The Eyes Of Alice Cooper (2003) and Dirty Diamonds (2005). It would have been interesting to see what Cooper and Roberts could have come up with had they stayed together a little longer. The all star cast did not stop with Roberts though as bassist Kip Winger went on to have a very successful career in the band bearing his last name.

Raise Your Fist And Yell will always be to me one of the most underrated Alice Cooper albums ever made. Sure, it doesn’t have that much musical ‘sophistication’ compared to some of the Coop‘s other albums but nevertheless it’s a very strong album overall.