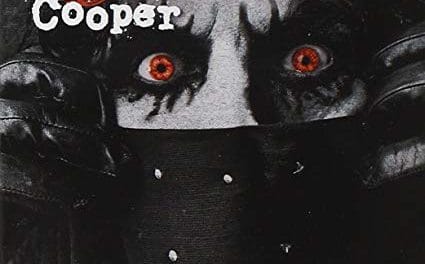 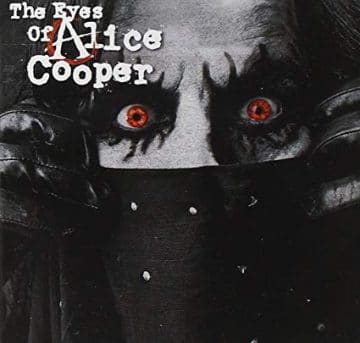 Reviewed by Lance Lumley in September 2018:
After releasing two dark albums with a heavier vibe (2000’s great Brutal Planet and 2001’s Dragontown), Alice Cooper went in a different direction on The Eyes Of Alice Cooper, where it seems he wanted a garage band/live feel to the record. With band members Ryan Roxie and Eric Dover helping with the writing, they created one of my favorite Cooper albums.

The opening “What Do You Want From Me” is a rocking song with the typical Alice humor to it; mentioning pop culture fads like the X Box, the singing trout and more. The Alice character even dumps his other girlfriends so this lady could be happy. It is a great opening to the release. “Between High School & Old School” covers one of the known Alice themes of adolescence and trying to fit into society, although playing by their own rules. The next two songs — “Man Of The Year” and “Novocaine” — are two of my favorites on the album. “Man Of The Year” is a driving punk feel song about a man that is perfect in everything , but yet is still not happy with his life. Although the lyrics seem serious, there are some parts that creeps humor in a non-traditional way. Why “Novocaine” was not a single release off the album, amazes me. It has a slower groove to it, but is reminiscent of the Rolling Stones, with the guitar work of Roxie and Dover dual playing sounding wonderful, while the rhythm section of bassist Chuck Garrick and drummer Eric Singer keeping the band in time.

Track eight “Bye Bye Baby” is a nice song on the album as a whole when listening to the album all at once, but doesn’t do much for just listening to it as a single. “Be With You Awhile” is one of the best Alice ballads ever in his catalogue. It has a mellow AM radio feel to it; heavy on keyboards with Alice singing soulfully. Many know Cooper‘s voice with an angry grovel to it, but he shines on this one. This is worth the album’s price alone. This reminds me of his hit “You And Me” where Alice references to old time movies in this song with a little humor added to the simple “get the girl” theme.

The release kicks up again with “Detroit City” — a song that pays tribute to acts like Ted Nugent, Bob Seger and the MC5, and the history the city had on rock music. Tracks eight “Spirits Rebellious” and ten “Love Should Never Feel Like This” are great songs in the overall flow of the album, but as stand alone singles — not much to say here. Track seven is a song that fans of Welcome To My Nightmare would love. The song entitled “This House Is Haunted” has the slow horror theme that one expects from Alice. It has horns and clarinets playing in a spooky way, with horror style lyrics on top. The band kicks in towards the end to create the intensity of the mysterious creepy tone.

Another gem, which has become one of my favorite Cooper songs (post “Poison” era) is “The Song That Didn’t Rhyme.” The humorous take on writing one of the worse songs in history — where not even the band members can play it — is also a dig at the so called music “critics.” It may be “A three minute waste of your time,” according to the lyrics, but it is a great song, especially when Singer‘s off beat drumming comes into the song. Cooper never loses his humor on this album. Track twelve “I’m So Angry” is a straight up punk song about being angry in the relationship. It is a heavy rock song. When I saw Cooper in concert in 2003, on his Bare Bones Tour, this was played at the show. If you like driving rock with a punk feel, this is one to listen to from the band. The last track “Backyard Brawl” is a weaker song compared to the others on the album, but it still keeps the attitude of most of the album. It’s a good ending for the album, as opposed to a slow song, but coming off of “I’m So Angry,” it is a let down or sorts.

Even though there are a few fillers on the album, the overall collection is a great, stripped down rock album. Not all of the songs have Cooper singing angrily, and the band is in fine form throughout every song. This is one of my, if not, my all time favorite, line-ups that Alice Cooper put together. Being an ex-drummer, this is a must have for Eric Singer fans. He is not flashy on the record, but has great backbeat that compliments all the other underrated musicians on the record. If you missed this CD when it came out, go get this one. It is one of Cooper‘s all time best releases.

Reviewed by Skid in October 2003:
“Nobody wants me hangin’ ’round, Unless it’s from a tree in the middle of town.” Alice Cooper has returned with his tongue firmly in cheek, displaying some of the wittiest lyrics since his forgotten early ’80s albums, which is great news! Alice steps away from the doom and gloom of his last two albums, and returns to his hard rock roots.

The Eyes Of Alice Cooper truly is a collaborative effort between Alice and longtime guitarists Ryan Roxie and Eric Dover, but even with the new blood, the album harkens back to days of old. The guitar sound is much crisper than the last albums, and at times, has a tone similar to that found on Love It To Death. In fact that’s part of the charm here, each song seems to have roots in a part of Alice‘s varied past.

“What Do You Want From Me?” is a hard rocking opener, with lyrics that lesser bands would die for. “Man Of The Year” has an updated sound — part punk but with a great guitar sound. “Novocaine” is a mid-tempo song that would have fit perfectly on The Last Temptation. “Be With You Awhile” is reminiscent of his string of late ’70s hit ballads, while “This House Is Haunted” brings back memories of “Steven.” “Love Should Never Feel Like This” sounds like “Love Potion #9” during the verse. Throw in “The Song That Didn’t Rhyme” (with it’s Hey Stoopid feel) and “I’m So Angry” (Brutal Planet-ish) and you have the makings for a great album.

Alice Cooper isn’t just the “Man Of The Year”, but it’s safe to say he has released the Album Of The Year as well. When Alice is on top of his game he can’t be beat, and The Eyes is Alice at his decadent best.