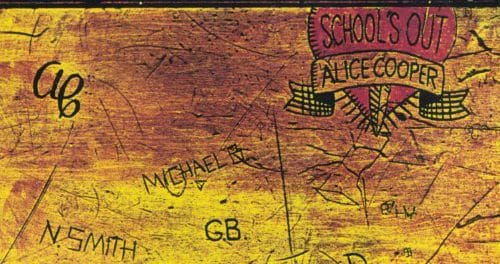 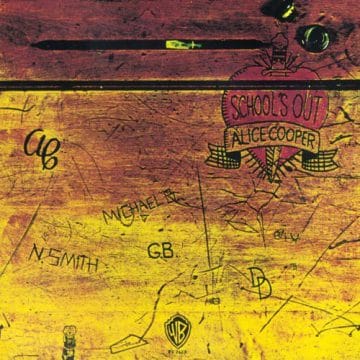 Review:
In June of 1972, I was a hyperactive six-year-old kid already in love with music courtesy of my parents and older cousins and kids in the neighborhood. As a military brat then living in Germany, it was not uncommon to get an earful of music blasting from some American GI or teen’s portable radio while racing my bike around the neighborhood. It was this accidental “musical contact buzz” that exposed me to music by bands like The Sweet, Slade, and the ever so creepy cool Alice Cooper.

Starting in the very early ’70s, glam / glitter rock dug its bright polished nails into my eyes, ears, heart, and soul and never let go. To this day, I still get an amazing rush listening to everything from Angel and KISS to Mott The Hoople and Mud to The New Dolls and Starz, and all matter of catchy colorful rock and roll. So it was no wonder that when I first set my eyes and ears on Alice Cooper, I was captivated. By the time the School’s Out album was released, I was full on hooked!

To this day, I still find it humorous that I am not really a fan of the band’s music released before 1971’s Love It To Death as this is the first bit of Alice Cooper I was exposed to. “I’m Eighteen,” “Is It My Body” and “The Ballad Of Dwight Fry” (while at the time going completely over my head) still remain some of my all-time favorite Alice Cooper tunes. The Killer album, also released in 1971, had even more killer (pun intended) tracks. While School’s Out (released a few months later) would host fewer singles, it is one of the earliest albums in my musical education to be filled with great deep tracks that I absolutely loved and still dig on up to this day.

Released just as the summer of 1972 kicked off, I can still remember the title track being cranked loud on many different radios as the older kids hooped, hollered, and ran all over to kick off vacation. To this day, I wonder what the Germans thought watching all these crazy shaggy-haired American kids go crazy all around them. I would imagine at least on a few occasions that they had to question having Americans living on German soil. Maybe they even thought we were “just a little insane” like Alice sang on my personal fave track from the record “Luney Tune.” Funny thing is that years later, my fellow musician friends still seem perplexed as to why I love this tune so much but just one listen and anyone can see how a little kid in 1972 would be sucked in. The lyrics rhyme and flow so well.

Even Mother Goose couldn’t have made it more palatable for kids. Did I know what it was even about? Well no. I was way too young but a few years later, this and other Alice Cooper songs would become my pubescent soundtrack despite by then being the furthest thing from cool.

While I find them kinda weird now, at the time “Gutter Cat vs The Jets” and “Alma Mater” were like watching Saturday morning cartoons with my ears while “Blue Turk” and “My Stars” brought a sort of variety show cabaret to the party. Being that all throughout the ’70s television, especially variety shows, were all the mainstream rage, the tunes connected in a way that other rock bands at the time couldn’t. Of course now, years later, everyone knows how obsessed Alice himself was with television. But hey, back then most Americans were.

“Public Animal #9” perhaps closest resembles what fans loved most about the last couple of albums leading up to School’s Out. While it doesn’t at first kick off that way, once the opening guitar solo hits, the tune is classic Cooper and is full of the rebellious content that drew teenagers (particular teenage boys) in at the time.

The following year, Alice Cooper would release their final two albums as a band – the amazing Billion Dollar Babies and Muscle Of Love – before Alice would go solo with his 1975 hit album Welcome To My Nightmare. By the end of the ’70s, the guy once considered every parent’s nightmare was knee deep into odd sounds and it wouldn’t be until the mid-’80s that he would get back to rocking with “comeback” album Constrictor and until this day, he hasn’t stopped. But before all of those ups and strange downs, Alice Cooper, the man AND the band unleashed the centerpiece of what many consider to be his greatest period of work – School’s Out.

Forty-five years later, the title track still stands as the ultimate tune to tear out of school with to kick into summer. And forever we will be grateful.

Alice Cooper playing “School’s Out” in 1972 on television: