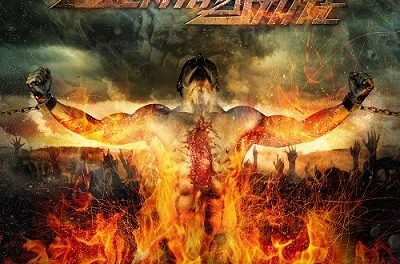 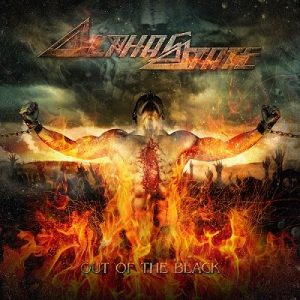 Review:
I am going on record and stating what should be VERY obvious. If this quartet from Greece doesn’t tighten your trousers, than you are officially brain dead.

AlphaState hail from Greece. I am not sure what’s in the water as of late over that way but some quality music is rearing its head from that quadrant and AlphaState are emerging like a juggernaut. Their self-produced, self-released and sophomore release entitled Out Of The Black is a perfect ten tracks of classic LA metal. Yeah, I said LA metal. Some will disagree but I don’t care. AlphaState combine the best of Menace To Society era Lizzy Borden and Delirious Nomad era Armored Saint. Sprinkled in with a bit of Bruce Dickinson-ish vocals and a dash of Queen of the Ryche era Queensrÿche and you have the beautiful band that is AlphaState and their standout album Out Of The Black.

From the opening note of the album’s title track, you know you are in for a treat as a massive wall of distorted guitars and an equally impressive tidal wave of drums and bass befall you and then singer Manos Xanthakis chimes in with his melodic banshee wail of a voice that will immediately remind you of Lizzy Borden and John Bush. The tone has been set and from hereafter, Xanthakis, guitarist Pete Breaker, bassist Dimitris Tsounakas and drummer Fivos Andriopoulos do not let up. This fearsome foursome is highly proficient with their respected instruments. As mentioned, Xanthakis wails in the ilk of Borden, Bush, Dickinson and Geoff Tate throughout the album and Breaker is a most excellent shredder that not only solos like he is putting on a clinic but the rhythms he crafts around Xanthakis‘ lyrics are supremely catchy, toe-tapping, headbanging and at times so peacefully surreal that I am addicted. Filling all those necessary bottom dwelling areas are Andriopoulos and Tsounakas who certainly compliment Breaker‘s guitar prowess and Xanthakis‘ vocal domination with plenty of thrills spills and fills throughout the album’s entirety.

Standouts are a plenty but “The Great Divide” is an epic melodic metal anthem. “The End” is a great album closing instrumental that is nice and mellow with oodles of tasty fretwork. As mentioned “Out Of The Black” kicks you square in the head and your head has no choice to bop and bang for the remainder of the album.

If you dig your hard rock/heavy metal in that old school vibe of the bands previously mentioned, than AlphaState‘s debut is a MUST have for your collection. I will keep spinning it when I need a bridge between my Lizzy Borden and Armored Saint faves of yesteryear and what I need from my bands today. The band is certainly putting forth a very listenable and highly enjoyable debut. I am quite looking forward to what AlphaState release in the future.

AlphaState‘s “Before The Soul Departs” video:

Alphastate “Before The Soul Departs” (OFFICIAL LYRIC VIDEO) from the album “Out Of The Black”facebook: https://www.facebook.com/AlphastateMetal/twitter : htt…