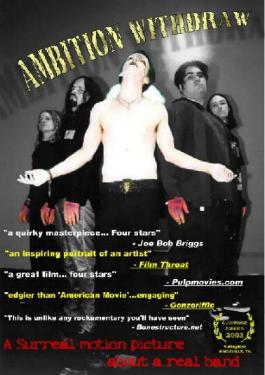 Overview:
Ambition Withdraw is the story of a little band from Chattanooga, Tennessee called The Unsatisfied and their singer/mastermind Eric Scealf.
The film was shot over a 15 year span, with a limited budget of $2000, showing the band evolve from garage-punk to glam and back to straight-ahead punk. Musically
they sound a lot like Iggy Pop & the Stooges, and have some interesting tunes (as well as song titles!). The movie is a
“tale of sorrow, woe, disillusionment and disenchantment.”

At first you have to wonder if the band is for real, with what comes across as a low budget music video of Eric running through a graveyard.
These “fantasy footage” scenes would pop-up throughout the documentary, and are the worst part of the film, as burning oneself in a coffin or smashing a TV while wearing angel wings
come across as sad attempts to shock. But thankfully after the first fantasy fiasco with get to see inside of Eric for the first time. He is dead-on as he roasts
artists such as G.G. Allin and Marilyn Manson who he feels try and make ridiculous what he holds scared, and that they offer no merit to art and music.
Eric definitely won me over with those feelings, and it showed how seriously he takes his craft–and all of this while shoveling shit at his day job!!

The remaining members of the band seem as down to Earth as any rock star can be, and offer some funny moments. Such as guitarist Johnny Stockman explaining
his electrocution from Eric‘s nipple, and bassist Damien believing that the entire band is gay–and perhaps even himself! The best part of the movie is the turmoil
that develops in the final minutes, as drummer Dave Schenk‘s alcohol abuse threatens to tear the band apart. My only complaint is, that after a career of over 15 years, there
should have been more footage like this. The inner demons of a band and in fighting always make for better reading/watching then your typical music video, and there just didn’t seem
to be enough of the “ugly” to satisfy.

But overall you slowly begin to respect Eric and the band, and how they are willing to keep fighting to get some (or any) recognition. Perhaps opening for
The Misfits in November 2002 will satisfy them, but I have my doubts. Will the band ever make it big? Likely not, and the fact that Eric “doesn’t just want to make it, (he) wants it to kill him”
may prove to be prophetically true.