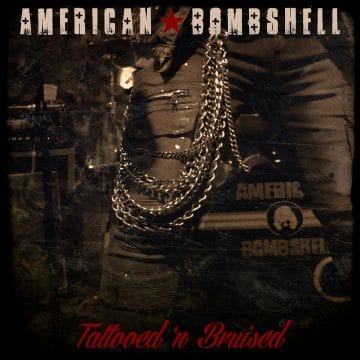 Review:
A rich and famous musician, who will remain nameless for the purposes of this review, once stated that rock is dead. It was a quote that raised much debate online amongst music fans and other artists. Whatever your opinion is, the evidence is undeniable — there are a lot of great bands out there still flying the flag for rock, despite rock no longer being the mainstream’s flavor of the month. Just look at all the fantastic music coming out of Sweden for instance, a majority of which I love. Saying that though, I have a penchant for good old straight up American hard rock. And that brings us to American Bombshell, a five piece from Indianapolis that I have had my eyes (and ears) on for several years now.

Back in 2016, American Bombshell released their debut album titled No Regrets. It was a blistering slab of hard rock from start to finish. It had elements of punk and the blues, and felt raw and energetic. You could tell that the band was hungry for attention. After winning the 2016 Grammy Amplifier program and getting the opportunity to spend studio time with legendary producer Mike Clink, which resulted in the song “My Drug”, it was full steam ahead for the band.

American Bombshell have now released their sophomore album titled Tattooed ‘n Bruised and it picks up right were the debut left off, with only a few slight deviations. Intro song “Money On The Liquor”, which was released as the first single from the album, immediately pounces into action signaling that the band is back and ready for business. A groovy simple riff commences proceedings before vocalist Jay Cee splits his time between talk-box and clean lyric lines about a failed relationship and what it’s going to take to forget about it. The track also features a guitar solo by Richard Fortus of Guns N’ Roses and backing vocals by the great David Roach of Junkyard, though I struggle to hear any of Roach’s vocal character in the mix. “Faster” follows with another cool riff and chorus gang vocals sounding very similar to something a thrash band would do. Song structure wise, it offers up a surprise in not relying on the typical verse chorus-verse-chorus scenario and places a bridge before chorus two, which I thought was perfect.

Next is “Run Away” which I had heard previously as a live version on YouTube and enjoyed thoroughly. However, I feel a little let down by the studio version as it feels a bit slow and mundane, lacking any feel or energy. Even the guitar solo feels a little uninspiring though overall, it is still an okay song. “Only Rock N Roll” brings the groove and energy back with Jay Cee sharing vocal duties with David Roach, with the latter this time heard more predominantly. Lyrically, we are schooled in the history and affects of rock ‘n’ roll by a master and an apprentice, with the apprentice obviously writing the lyrics and earning top marks from the master. This time around, the guitar solo is a scorcher and aptly suits the song. Next up is “Raising Hell & Living Sin” which is probably my favorite track on the album. The opening riff is fantastic and moves along at a brisk pace before it transitions to simple chords throughout the verses. Once again, the solo is great and whilst the lyrics aren’t Shakespeare, they are motivational and fun.

Now we get to the midpoint of the album and my worst fears are met — a ballad. If you have read any of my previous Sleaze Roxx reviews or Facebook posts, you would be aware that there are two things I hate the most. One is digipaks and the other is sappy ‘I love you’ ballads. A cold chill comes over me as the first acoustic notes of “Joyride” erupt from my speakers followed by some acoustic lead guitar. I immediately start thinking that this is so cliché, that I’ve heard it a million times before. I listen to the first verse and I’m just about to skip to the next track when the second verses catches my interest. And then damn it, the third verse intrigues me more and I keep listening. Lyrically I am getting that the song is about losing a best friend or partner in crime who took things just a little too far. Ultimately though, “Joyride” has all the hallmarks of a mass appeal ballad, is radio friendly and is going to make couples get together and slow dance. I would go as far as saying that the song almost has a country vibe to it mixed in with Jay Cee’s vocals sounding hauntingly like a Too Fast For Love era Vince Neil in some parts.

“Stupid = Famous”, “Degenerate Love Song” and “The Bitter End” fill the back end of the album with straight up rock songs all enjoyable in their own right. I love the chunky riff during the verses of “Stupid = Famous” and it’s cautionary tale of how people are becoming famous for the wrong reasons, whilst the public (stupid themselves) continually fuel that popularity. Think along the lines of YouTubers or the Kardashians and you will get the idea. The guitar solo in “Degenerate Love Song” pulls out all the tricks and the chorus is catchy and guaranteed to have crowds participating. The final song, a cover of the Supersuckers‘ “Pretty Fucked Up” follows and as I was not familiar with the song, I had to hit up YouTube for a listen. Suffice to say, the American Bombshell version blows the original away by adding more of a punk attitude and a greater energy level.

As a bonus, there are two additional songs which were previously only released on seven inch vinyl and in the digital format. The aforementioned “My Drug” produced by Mike Clink is a great song which cruises along, has a great guitar tone and has solos that just rip your face off. “Saving Me” is a fast paced rocker which encapsulates everything that American Bombshellis about, and successfully ends the album on an absolute high.

Unfortunately, no review can be complete without some form of criticism and that is reserved for the production and the sound of the guitars during the rhythm sections of tracks one to ten. Even though the sound is nice and clean, and you can hear every note being played, the guitars just feel like they have been neutered. There is no life or grunt to them. This is especially noticeable in passages where the guitars are frantically strumming away on straight up power chords. I have watched many American Bombshell live videos and have always liked the band’s sound, even through phone footage, so I was slightly disappointed. I’m not a studio engineer, but it sounds like too much compression has strangled the air out of the sound. Maybe adding some more reverb would have made things sound less constrained. If I had to give an example I would probably compare it to when Mötley Crüe went from the bright sound of Girls, Girls, Girls to Dr. Feelgood.

Whilst I thoroughly enjoyed this album, it isn’t breaking any new ground and the riffs and chord progressions have all been heard before in some manner. That’s okay though, as fans will still lap it up and it will feel comfortably familiar. I must say that the lead guitar work for the solos, melodies and fills is a standout and really elevates the rating of the album. However, the real shining light on Tattooed ‘n Bruised is undoubtedly vocalist Jay Cee. What a voice. He seems to have the ability to change his vocal style making each song sound like it is being sung by a different singer, yet being able to retain a portion of his own identity. His transition from calm soothing vocals to angst filled aggression is handled well and with relative ease.

Rock is definitely not dead!