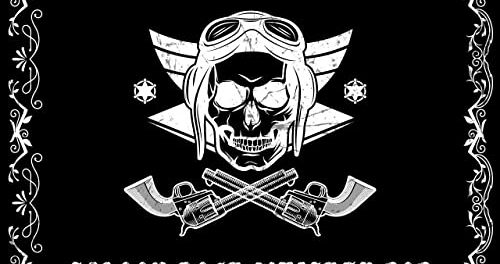 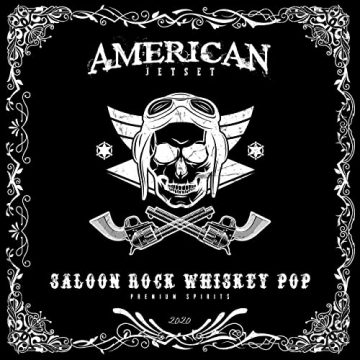 Review:
The first few years in the life cycle of a band can be critical ones and following up a well-received debut is a daunting task that’s sometimes easier said than done. Ever wonder what happens to all the bands that win a Grammy award for their first album and then vanish overnight? The old saying that “you have all of your life to write your first album, and months to write your second” comes to mind. In order to ride the momentum of a successful debut album and tour, it’s often critical to maintain a level of visibility and not leave the public eye for too long. But with that brings the risk of rushing the second album and throwing things against the wall to see if they stick.

This brings us to American Jetset, who have just released their sophomore album Saloon Rock Whiskey Pop. I first heard American Jetset at the 2019 “MB4” event where they shared a bill with Babylon Shakes, Kickin Valentina and Every Mother’s Nightmare. I was at the event specifically to see EMN, but also interested in seeing Babylon Shakes and Kickin Valentina for the first time. Usually when I attend a concert, I make a point of getting to the venue a bit early to catch the opening / co-headlining bands too. As a diehard music fan, you just never know when you’re going to stumble across something new that you might like. This was exactly the case with American Jetset, one of Maryland / Northern Virginia’s most promising up & coming hard rock bands.

In the following weeks, I picked up a copy of their debut album Live, Love, Die On Main and was blown away by what I heard. The Sunset Strip era of hard rock is one of my personal favorites in music history, and American Jetset sounded like the direct descendants of those sleeping giants. They had resurrected that sound in a way that I hadn’t heard in quite some time. Even more intriguing to me was that they were from my neck of the woods. Live, Love, Die On Main went on to become a mainstay of my stereo system for much of the year and I had the privilege of hearing them perform those songs live several times throughout 2019.

The band spend late 2019 and early 2020 working on the follow up, Saloon Rock Whiskey Pop, and it finally hit the streets in late February. After my first few listens to the EP, it has the loose feeling of a concept album. The sonic journey begins with the whistle of a steam engine as four masked marauders gallop across a vista of tumbleweeds. These sounds set the mood as a familiar voice echoes in the distance offering up a “Welcome To Devil’s Canyon.” Opening track (and first single) “Walking Contradiction” immediately struts into the room and out of your speakers with a slinking, back-alley bass groove as the train robbers take their place onstage. I picture the band playing behind a fence in some wild, wild west roadhouse as the track’s namesake works the room in a cool, calculated way. “Walking Contradiction” is a romping, cautionary tale about that type of girl that’s better avoided.

A down n’ dirty chord-pattern and screaming guitar lick usher in “Gold & Nines”, which are accompanied by an infectious rhythm that’ll have you tapping your steering wheel to the beat in this radio ready ode-to that top shelf commodity in your life. That’s what I love about this band’s music. It’s so kinetic, and “One More Time Around” is full of that same swagger and bounce. It opens to the sound of blotting guitar notes trickling from the fretboard before segueing into the heavy groove drives the song. T. Lance Reeder turned in a really soulful guitar solo on this number. My interpretation is that it’s all about taking things in stride. Hard times come easy so enjoy the finer things in life.

The tempo of “Getaway Car” takes things down just a notch. It’s a mid-tempo song and ultimately an anthem about new beginnings and escaping any situation that you might be battling in your life. This song brings a lot of visuals to mind for me and has endless possibilities for music video treatment. When I listen, I picture a car peeling wheels out of the parking lot and leaving daily trials and tribulations behind in a cloud of dust. Listen to the lyrics and you’ll surely identify. The racing, opening riff of “1,000 Ghosts” immediately signals that the gloves are off and it’s on. This is Saloon Rock Whiskey Pop’s big gun that’ll just bludgeon you at their live show. It’s a beast of a song that chugs along mercilessly. The guitar sounds like a revving engine until singer Ian Kaine MacGregor pulls the trigger with the line “you won’t get away this time”.

American Jetset saved the best for last with the brilliant simplicity of “Never Be Goodbye.. The acoustic sing-along is one of the album’s finest compositions that (I assume) is told from the perspective of a new band on the road and the connections they’ve made with their fans. It features the gorgeous, glowing background vocals of Christina Oliviero before the band rides off into the sunset, vowing to return someday. I can foresee this being a huge smash for the band with both fans and at radio. Prior to receiving a promo copy of Saloon Rock Whiskey Pop, I downloaded it for $8 from the band’s website for the purpose of writing this review, but it’s also available on Apple Music. My only complaint with the EP is that it’s too short. Not in an incomplete / unfinished business sort of way but with just six tracks (three of those clocking in under three minutes), it left me wanting to hear more. But as the old showbiz adage goes, “always leave them wanting more.” Mission accomplished.