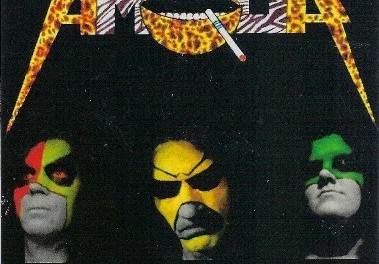 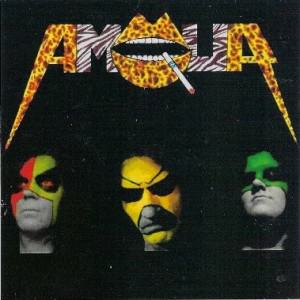 Review:
When I first saw Amour play live, all I could think about was how they were ripping off or at the very least heavily borrowing from KISS‘ early make-up era. The theatrics, face make-up, look — with a lot of colour compared to KISS‘ black and white look — choreographed moves… everything screamed KISS to me.

It is therefore no surprise that Amour‘s debut EP reminds me quite a bit of KISS‘ three first studio albums. It’s not that the songs on Amour‘s self-titled EP are in the same league as the classics on KISS‘ first three albums but more that the songs are raw, need some work and the overall production is quite rough around the edges. Frankly, the songs on Amour‘s EP sound like rough demos. It was only when KISS released Alive! that their songs from their three first studio albums started to get their just due and part of it was surely because all of the songs were played at a much faster pace and had a heavier feel than what could be found on KISS‘ studio albums. While I don’t think that Amour can speed their songs up that much more live from what you hear on their self-titled studio EP, it seems to me that my experience of hearing them play live was more enjoyable than listening to their studio album. Of course, I have to take into consideration that I saw the band play live at the end of September 2015 and Amour was released in 2011 according to what bassist Rick Priest has advised me. Four years is a long time to refine and improve songs.

Despite the substandard production and sound, the more I listen to Amour, the more I like it. I think the genesis is there for some cool songs but the production on Amour is so bad that I often get hung up on the poor sound rather than the songs themselves. There are no lyrics attached to the very no frills CD packaging but it seems that Amour are paying tribute to the legendary but now defunct bar Larry’s Hideaway in Toronto, Canada with their first track “Larry’s Hideaway.” My favorite track from Amour — just like when  I saw them live a month and a half ago — is “Devil’s Daughter” with its J.D. Fortune (ex-singer for INXS) like sounding vocals during the verses and the cool guitar licks. “I Got No Class” reminds of Wicked Lester — Gene Simmons and Paul Stanley‘s pre-KISS band — in that there seems to be a lot of instruments and noise going on at the same time. The guitar solo sounds a lot like vintage Ace Frehley stuff. In fact, all of the guitar solos remind me of Frehley‘s early guitar work in KISS which is a good thing because not that many have been able to emulate the Space Ace‘s guitar sound. All of the vocals need work, may it be if it is guitarist Mitch Knight singing on the first four tracks or Priest on the last track.

There is no doubt in my mind that the five songs on Amour‘s self-titled EP have a lot of potential but they really need to be properly recorded and likely tweaked here and there so that they reach their full potential. Apparently, Amour are working on a new album to be released later this year so I can only hope that the songs on that album will get a much better and proper production treatment. I wonder if Canadian producer Mike Bond who produced Shock‘s two albums, Once Denied and Forewarned, and really transformed their demo songs into legitimate heavy metal masterpieces might be able to work his magic with Amour and transform the band’s rough and ready demo songs into legitimate sounding songs…