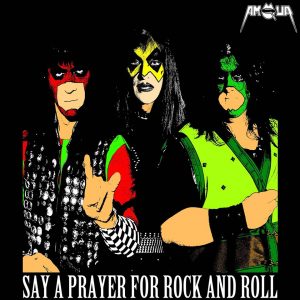 After receiving a very lukewarm review from Sleaze Roxx for their self-titled five-song EP, Amour are back for more with a full-length album entitled Say A Prayer For Rock And Roll. My biggest issue with the songs on Amour‘s previous self-titled EP was that they sounded like a bunch of rough demos but I thought they had the potential to be saved with some good production. So what happens when Amour get the decent production that their songs deserve? Well, the result is that I am still not liking their songs but for different reasons this time around. Once again, the songs have a real retro feel to them reminding me once again of the music from those first few early KISS albums but with better production. The problem this time is that I don’t like any of the lead vocals. I am mindful that both guitarist Mitch Knight and bassist Rick Priest apparently take turns handling the lead vocals. I can’t really tell who is singing which song but overall, the singing on Say A Prayer for Rock And Roll just grates on my nerves. I don’t know if the singing is off key or what but I have a hard time getting through any song due to the singing.

Truth is the music itself sounds pretty good on a lot of the songs despite the very retro ’70s feel. In addition, the production issues plaguing Amour‘s self-titled EP are by and large no longer present. Examples of great ’70s era music can be found on tracks such as “She’s Got The Touch” and “Glam Boys.” Those two songs are the best of the lot with the former’s chorus being quite memorable in a good way. The ballad “Girl From Trois Rivières” isn’t bad due to the vocal harmonies for a good part of the song almost saving the vocal portion of it. The best part about “Metal Messiah” is that there are no vocals until the 1:48 minute mark of the song. The singing during the ballad “Closet Of Time” is at times simply painful to listen to. I do like the acoustic guitar portions on it. The best track on Say A Prayer For Rock And Roll is “Rockin’ And Rollin'” partly because the lead vocals are mainly done in vocal harmonies and with the Ace Frehley like guitar solo.

Perhaps the most telling feature is that after listening to Amour‘s Say A Prayer For Rock And Roll way too many times in the last few hours for the purpose of this review, I put on Accept‘s song “Beat The Bastards” from their album Blood Of The Nations. It felt like I had just traded in my old clunker of a car (i.e. Amour‘s songs) for a brand new sporty model (Accept‘s songs). I have listened to Say A Prayer For Rock And Roll way more than I would usually listen to an album that I don’t really like in the hopes that I would warm up to it but no dice. I just can’t get past the singing.