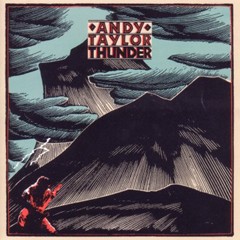 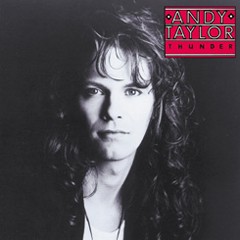 Review:
The year was 1987 and hard rock had hit its commercial peak. Aerosmith, Whitesnake, Guns N’ Roses, Def Leppard, Motley Crue and many more released successful albums that year and achieved commercial stardom. But not Andy Taylor — a guy who a few years before was a megastar with multiple top 40 hits and albums.

Andy Taylor‘s debut album Thunder was a big departure from his Duran Duran, and even Power Station, past. While Power Station was definitely more rockin’ than the ‘Duranies’, this LP was even more guitar driven than that funky hard rock release. Taylor called on his partner and friend Steve Jones (Sex Pistols‘ guitarist) to co-write, play and co-produce this album. Along with drummer Mikey Curry (The Cult, Bryan Adams, David Bowie, etc.), bassist Patrick O’Hearn (Frank Zappa and Missing Persons) and keyboard player Brett Tuggle (David Lee Roth, Fleetwood Mac, Steve Lukather and more) they made, in my opinion, a great rock record that really captured the sound of that period.

The LP is a mix of mid-tempo ballads and rockers, with love being the dominant subject, and with the exception of the first single “I Might Lie”, it isn’t very fast or too hard rocking. Thunder instead is a great AOR album with several stand-out tracks like the title song, the aforementioned hard rock extravaganza of “I Might Lie”, the second single, a heartfelt plea to a loved one, “Don’t Let Me Die Young”, the very melodic and emotional coming home song “Night Train” and the groovy and sexy “Tremblin'”. As a whole Thunder has great lyrics with lots of hooks, sing-a-long choruses, refrains and bridges and great musicianship.

It was a strange decision by Taylor (or whoever was responsible) to not include his two solo hit singles at the time, “Take It Easy” (from the American Anthem movie) and “When The Rain Comes Down” (from Miami Vice 2), on the original pressing of Thunder, as they may have improved the album’s sales.
In any case, we are left with a great album from a very talented guy, and I recommend this CD to every ’80s rock fan… You won’t be disappointed.