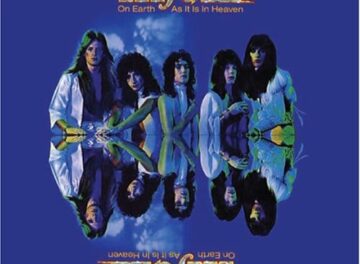 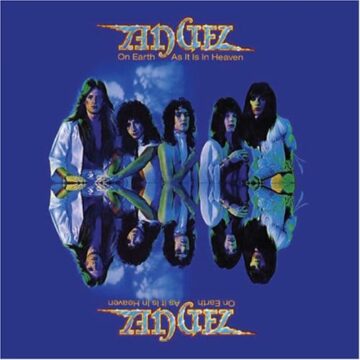 ANGEL
ON EARTH AS IT IS IN HEAVEN
Released on June 15, 1977 (Casablanca Records)

Review:
The third record by 70’s rock band Angel — On Earth As It Is In Heaven — is considered by many fans to be the bridge between the group’s early glam rock sounds and later power pop tunes and for good reason. Label Casablanca Records not only upped the push with a couple promotional videos but stepped up big time as far as marketing unveiling a brand new band logo that read the same upside down as it did right side up to go with the sort of mirrored reflection image of the band on the cover art. Toss in producer Eddie Kramer, known for his work with Jimi Hendrix, David Bowie, Humble Pie, Led Zeppelin and Casablanca labelmates KISS, and you have all the makings of something huge leading to Angel‘s first (and last) tour of Japan and a growing visual presence in various rock magazines. So what that it did little to endear the band to radio after all, KISS was pretty much the biggest band on the planet and radio barely noticed so it wasn’t tough to believe that this white clad group labeled by some the antithesis of KISS, could be the next really big thing. With songs that mixed the best of 70’s glam and arena rock as well as mild hints of prog and pop, it’s a wonder that Angel didn’t somehow find a place among the biggest bands of not just that era, but of all time.

I will admit that like some, I was late to the Angel party. I discovered White Hot in a weird magical way on a dark cold winter evening outside in 1979 and fell totally head over heels for the band. However, with little to find on the group in my area, it took a bit of hoping and searching to find copies of the earlier songs and it seemed once I was finally fully entrenched in listening, all of my belongings were packed up as we moved to Atlanta for what would be a full school year. Point being, I would have to wait months until our final move to have access to all of my music. Luckily, once again, something significant happened to keep me and the music of Angel together. Shorty after arriving in Atlanta in late 1981, I stumbled upon a stack of Angel records in a thrift shop next to a laundromat where my folks had stopped and in another sort of magical moment (cue angelic choir), I stood wide-eyed and speechless as the lady at the register took my five dollar bill in exchange for nearly mint copies of all five studio records including a still sealed copy of On Earth As It Is In Heaven, which finished blowing my mind once I got home and found the poster inside! I guess my excitement at the thrift store was obvious. Before leaving, the lady looked at me and said “Hey kid, this one’s on me” before tossing a used copy of Angel‘s Live Without A Net into my still shaking arms. But yeah, maybe that’s a story better saved for another review down the line.

Starting with Barry Brandt‘s pounding drums leading into a full on band barrage complete with Punky Meadow‘s wailing guitar, On Earth As It Is In Heaven kicks off with the straight forward rock and roll of anthem “Can You Feel It” delivering the heavier side of Angel. Full of ingredients boiling since the band’s self-titled 1975 debut release, the tune is a stop and pound, wailing vocal burner that only smooths out pre-chorus. Even with all the rock power, Angel still manages to eventually unload a catchy cool no-nonsense chorus. Of course, the guitar solo is pure effect blitzed Punky and totally rocks. Even when Gregg Giuffria‘s synthesized keys show up, “Can You Feel It” still manages to rock to a solid finish.

“She’s A Mover” takes the finer points of 70’s American and English glam rock and pours it into a power pop blender of anthem goodness. In Angel fashion, it’s catchy, unique, quirky and of course has a very saturated sweet solo. And let’s be honest here – few legendary vocalists of the day could sing every end of the spectrum like DiMino. Holy toledo man! Could (and can) this most underrated of singers blow! Funny thing is, I’ve often wondered if more people had heard and seen Angel, would DiMino had gotten credit for the medieval look and devil horn hand sign popular with metal heads going forward instead of the late great Ronnie James Dio? Guess we will never know.

Just a few songs in is all it takes to wonder if producer Eddie Kramer had a hand in sequencing. In addition to some cool tunes, perhaps the strength of Angel‘s third record is how it flows, kicking off with straight up rock followed by a pretty moving power pop rock tune then straight into a slower groove courtesy of “Big Boy (Let’s Do It Again)”, a tune as close to a hip shaking dance track as a rock band might get in the 70’s. It’s the kind of track the teenage guys back in the day would just beg to come on while the low rider, hip hugging jean gals were on the dance floor. You know, slow ass shaking music. A nice set up to grab a girl for semi-ballad “Telephone Exchange.” For some, such moments might have bordered on awkward but the possibilities easily well worth the wait for either what was on the brain, or the heavier moments to surely come.

Not wanting to take all the air out of things just as side one spins to a finish, “White Lightning” drops yet another chance to boogie and marks the sole instance on On Earth As It Is In Heaven that isn’t credited to the entire band composing wise. Not surprisingly, it is also the instance the record shines the least but even as the weakest track of the bunch, it’s still a really cool one and again, perfectly placed. Without it, the record wouldn’t have been lost but even so, “White Lightning” makes for a solid track to keep the flow going.

Side two follows a similar path moving from sirens into plodding drums and finally the rolling sounds of “On The Rocks”, an ode to the non-angelic move of wandering a bit below the belt line and seemingly, the age line. Not really a new story as many a rock and roll tune has expressed the ups and downs of being caught in the throes of forbidden love by a not so forgiving father but even so, one of Angel‘s most rocking tunes and once again, DiMino‘s vocals are blistering. Maybe the thought of years being chained to a rock pile managed to get ol’ Frank a bit emotional.

If dropping a catchy power pop tune after a side-opening rocker worked on the first half, then Angel and Kramer must have figured that a double dose would be the perfect direction to go on the flip and the sequencing move borders on brilliant. “You’re Not Fooling Me” is a semi-piano ballad punctuated with shards of guitar swells leading to the wonderful chords of power ballad bliss. With a guitar solo blending the best parts of melody and intensity, the song sets the perfect tone for the bubblegum catchiness of “That Magic Touch.” With a nod towards clever, visual lyrics and a bit of show tune flair, it’s the kind of song that should have been as popular as any similar territory Dennis DeYoung / Styx tune, especially once the chorus kicks in. The type of track that not only sets Angel apart from most rock bands, but another side of the band that further shows a musical diversity that hits everything found within the genres of pop and rock.

Speaking of rock, “Cast The First Stone” hints back to Angel‘s earliest rock moments like “The Tower” from the group’s 1975 self-titled debut. Loaded with power, searing keyboards and again, DiMino‘s soaring vocals, it is every bit as majestic as any Dio-era Rainbow track. Again, it begs the questions of “what if” as in, what if Angel had found more mainstream success and what if the band had seen their potential result in a spot alongside the elite of 70’s arena rock bands. It could be said that “Cast The First Stone” is Angel‘s “Man On The Silver Mountain” as there are many similarities including the groove and incredible guitar solo and vocals, not to mention the very fantasy-like themes found in many a Ronnie James Dio song. While in many ways odd following the quirkiness of “That Magic Touch”, it is as well constructed a hard rock tune as can be found as well as a suitable lead in to the nearly two minutes of organ-loaded musical beginning of intense ballad “Just a Dream.” It’s hard to imagine few other singers in rock and roll pulling off “Cast The First Stone” as well as the trembling vocals found on this hauntingly gorgeous track which very well may have just as many enticing moments musically as vocally. It closes off Angel‘s third release as if the album is wandering from real-life into, well… just a dream. Obviously, the effect the band was going for.

Reaching #76 on the US charts, On Earth As It Is In Heaven was the first Angel release to crack the top 100 building up to nearly breaking into the top 50 (55) the following year with amazing follow up White Hot. It is the final Angel record to include founding member / bassist Mickie Jones. Reportedly tracked deep in the Hollywood Hills in a castle, it contains a sound that is a bit more airy than the rest of Angel‘s recorded catalog. The group would attempt to add to their momentum with White Hot in 1978 and the band’s much more poppier (and for some overproduced) 1979 record Sinful but by the time of 1980’s Live Without a Net, punk rock, new wave, and even disco had veered listeners away from Angel‘s style of pomp and glam rock.

Sadly by the time the band had worked up to being prepared for mainstream stardom, they had fallen in between a space past the glam and glitter rock of the 70’s and just before 80’s hair metal leaving only keyboard player Gregg Giuffria to find any semblance of success, first with the band Giuffria and then with House of Lords. But despite not finding their rightful spot in the upper echelon of rock and roll, for a brief moment in the 70’s, Angel was for many rock and roll fans as close to being On Earth As It Is in Heaven.

Angel‘s “You’re Not Fooling Me” video: