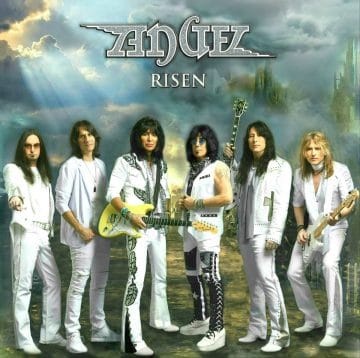 Review:
Heralded as one of the most anticipated releases in recent rock history, the latest album by seventies glam rock band Angel, Risen, has garnered a pretty heavy amount of positive response littered of course with the expected amount of “it’s not (fill in your favorite Angel album)” and honestly, any mature person with a brain shouldn’t expect it to be. While it’s true that two of the band’s main songwriters – Punky Meadows and Frank DiMino – make up the focal force of Risen, it misses many key ingredients found on those classic seventies Angel albums like a few more original members and of course, the one thing that can never be replaced or even duplicated, the spirit of the time and place those albums arrived in most of our lives. That “thing” that to this day makes us feel a certain way when we put on those old records. Bring back every living member and you still couldn’t re-produce that and honestly, I’m not even a smidge sad about that.

Risen is a marvelous new rock and roll album landing in a world currently lacking a good bit of killer rock and roll. A 2019 Angel record that sounds like Angel, just for today and even though previous Angel release In The Beginning was also towed along by a pair of Angel alums in DiMino and drummer Barry Brandt, it can’t even begin to hold a candle to Risen. But why even try to explain when every day, you can read comments by old school rock fans who bitch about a lack of new original material by their old favorite bands and when they do get something new? They respond by saying, “They should of made it sound more like (fill in your favorite old school rock album).” I’m just overjoyed to have been able to hear the old Angel songs performed live, and just as jazzed to have Punky Meadows back on the rock and roll map.

Heck, if anyone has come close in recent years to capturing their classic sound, it’s Punky and Frank on Risen. It’s just impossible to produce something that has already been magically created regardless of whether the name on it is Angel, Punky Meadows and Frank DiMino of Angel, or just Those 70s Dudes in White. Truth be told, I was far more excited about Punky and Frank playing old Angel songs and putting out new music than I was about them deciding to do it under the Angel banner. I mean, heck yeah it’s cool, but really didn’t pull much from me than a shrug. I was already digging Frank and Punky‘s recent solo releases, excited about their new tag-team alliance, and the prospects of more new music together. The name of their pairing was inconsequential in comparison.

In 2018, I kicked off the year with Angel‘s White Hot as my first Sleaze Roxx review of the year and as I listen to the opening strains of the ever familiar “Angel Theme (prelude)” from the band’s most recent album Risen, I can’t help but to chuckle at the fact that two years later, I’m starting another new year off covering a new Angel record. Something I never would have imagined ever, especially just a couple years ago. Yeah, maybe a bunch of other rockers might shake their heads at yet another version of the theme kicking things off but on an album with way more tracks than on previous Angel records, I sure wasn’t upset about it and when I heard it, my teenage heart was actually thankful for it. When you’ve missed something (or someone) for so long, sometimes just a small piece of it can do a big amount of good. To this point, the Risen experience was already a welcome one. With my wife buying it for me on double gatefold vinyl, I found myself blessed with the long missed experience of basking in the glory of an Angel record, holding it in hand while glancing over every visual detail, liner note, and of course that unforgettable reversible band logo. The sounds of dropping the needle on wax and the first opening notes of the “Angel Theme” blasting warmly through the house only added more growing excitement to the rock and roll proceedings.

With Risen kick-off single “Under the Gun”, the band waste little time responding to understandable fan ponderings of if this in fact is an Angel album. From the start it’s all there – pounding drums, Angel style guitar riffs, deliberate guitar solo, melodic keys, and of course, vocals as only DiMino can pull off. The melody, hooks, style, and overall Angel vibe is there, especially once the catchy chorus hits. I had read where someone had asked Frank what a follow up to Sinful might of sounded like and honestly, if it had come close to this, I would have been more than happy. It makes me wonder what Angel might have sounded like had they pushed through into the hair metal era of the eighties and part of me believes they would have eventually altered their sound and not sounded near this good. And “Under The Gun” is just a small taste of the hard rocking tunes to be found classic Angel style on Risen. “Over My Head”, “We Were The Wild”, and “My Sanctuary” rock out as worthy offerings to fans driven by their more rocking earlier style, but as kick ass as the harder tracks are on Risen, it’s within the catchy melodies of the album’s anthems and power ballads that my teenage heart is completely sucked in.

While a fan of every Angel record, admittedly I am forever connected heart, mind, and soul to the sights and sounds of White Hot and Sinful the most, and tunes like “Shot of Your Love” “Tell Me Why”, “Desire”, “Turn Around”, “Don’t Want You to Go”, and my personal current fave Risen track, “1975” draw me back to those days blasting great tunes from Angel‘s final two releases on Casablanca Records. Toss in a pair of incredible tunes a la ballad “I.O.U.” and inspirational sing-a-long power ballad “Stand Out” and honestly, it’s hard to imagine how even the most die-hard Angel fan could be disappointed. The fact that Punky and Frank even go so far as to take it back by closing the album off with a new version of the first ever Angel album track Tower is simply just additional icing on the Dolly Madison Zinger after all this unexpected musical yumminess.

With seventeen combined tracks, Risen is what every Angel fan has been dreaming about for decades and then some. In one unexpected full swoop, Punky and Frank have opened the wings of one of rock’s most unique musical acts and allowed a devoted legion of fans to be washed in a baptism of nearly two albums worth of great rock and roll. They’ve done the work and now it’s up to fans to decide for themselves if it’s enough to fill their desire for Angel music. Punky and Frank alone make it worthy of carrying the Angel banner. Bottom line, Risen is a kick ass rock and roll record that sounds and feels like an Angel record. One that in my opinion is deserving of a place within the band’s recorded musical history. A much needed rock and roll record in this day and age that takes many of us back to 1975 when we indeed were the wild with a youthful desire to stand up and raise a united fist for life, liberty, and glam slammin’ anthem rock and roll. A few years back, former Angel label mate Gene Simmons of KISS stated that rock and roll was dead. That may have been a bit over dramatic but maybe, just maybe, thanks to Angel, it has once again Risen from the dead.

Angel‘s “We Were The Wild” lyric video:

ANGEL “We Were The Wild” Lyric Video off of RISEN