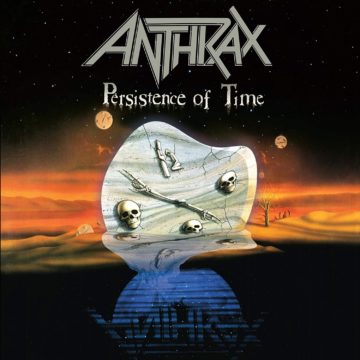 Review:
2020 will mark the 30th anniversary of Anthrax’s fifth album, Persistence of Time, with deluxe reissue that will feature previously unreleased tracks, and like with their anniversary editions of Among The Living and State of Euphoria, they emptied the vaults for this one. A little bit of info on the newly remastered album, it is available in a double CD and a DVD or for you vinyl aficionados, it will be available as a four LP package. Surprisingly, this new package will not be available digitally. The DVD features footage that Anthrax and their road crew captured on their 1991 tour with Iron Maiden, one of the highlights being footage of drummer Charlie Benante with Iron Maiden on “Sanctuary.” The booklet features deluxe liner notes and information on the studio tracks as well as info on the rarities and bonus tracks featured with.

Persistence of Time was Anthrax’s most successful album until The Sound of White Noise in 1993. This would also mark the last album with frontman Joey Belladonna who officially left (or was dismissed) in 1992, then returned in 2005 to 2007 for Megadeth frontman Dave Mustaine’s Gigantour, but didn’t ‘officially’ return until 2010, just in time to lay down vocals for 2011’s stellar Worship Music.

In comparison to their previous efforts, Persistence of Time featured their most dark and moody material up until that point. The band’s image evolved from colorful, skater clothing and bermuda shorts to blacks jeans and black t-shirts. The standouts on Persistence of Time are “In My World,” “Belly of The Beast,” “Keep It In The Family,” “Gridlock” and the cover of Joe Jackson’s “Got The Time.” The band’s sound was more accessible on Persistence of Time, but it wasn’t the band’s strongest effort, aside for the fact that Anthrax took part in The Clash of The Titans Tour with contemporaries Slayer and Megadeth who Anthrax rotated closing the show with throughout the tour. Opening the show was Alice In Chains who were on the rise and by the end of that tour, they had won over the rivetheads.

Featured prominently in their The Clash Of The Titans set was “Belly of The Beast,” “Got The Time,” “In My World” and “Keep In The Family.” Those tunes have stood the test of time as they have been in the rotation in the setlists since Belladonna’s return. The Persistence of Time reissue features the original album, remastered, alongside several rarities, including “I’m The Man,” which displayed the band’s love for rap music. It is what it is. Frankly, the song hasn’t aged well, though it did inspired nu-metal acts like Rage Against The Machine, Limp Bizkit and the like. If you’re not a fan of the rap / rock genre, you’ll likely skip right over that one. There’s a live recording of “Time” from 1991 Persistence of Time Tour, while the bulk of the bonus material comes directly from the drummer Charlie Benante’s vaults. He’s the band archivist who had copies of riff tapes, pre-production demos tapes and additional recordings that took place during the writing of the record including guide vocal tracks and ‘jam room’ recordings.

At the end of the day, this album was a slight departure for Anthrax, coming out of State of Euphoria, it was a darker, edgier, contemporary version of Anthrax. Overall, the album is ‘good,’ but not great. There’s some solid tunes on this one, but overall it’s not groundbreaking and a placeholder album for what was to come with the departure of Belladonna and the arrival of John Bush and his debut on The Sound of White Noise.

Anthrax‘s “Got The Time” video: