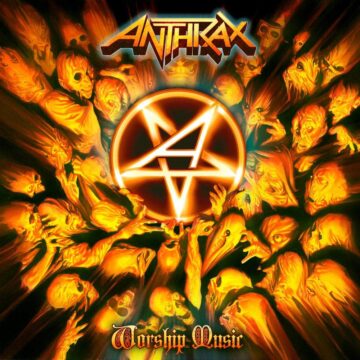 Review:
It’s been eight long years since Anthrax issued new music, and a lot has changed since then. Singer John Bush left, then returned briefly to bail the band out after his replacement Dan Nelson quit; lead guitarist Dan Spitz has come and gone, only to be replaced once again by Rob Caggiano; Joey Vera left the bass slot open for Frank Bello‘s return; and most importantly Anthrax reunited for the third time with the man most fans consider ‘the voice’ of the band, Joey Belladonna. This is great news to old-school and longtime fans, but it didn’t work before so there are still skeptics that think this isn’t long-term. I’d like to point out that this line-up has been in place for merely one year thus far, and the last time they reunited with Belladonna it took three years before things went sour — I can see why people are skeptical.

Anthrax‘s Worship Music is one of the most highly anticipated albums that I can recall in a while. The fact that Anthrax was able to salvage some of the music from the Dan Nelson era, improve on it, and bring Belladonna into the studio without imploding is nothing short of miraculous. The band members themselves raised expectations in interviews when speaking of the music they were recording, or had recorded, by describing it as “The best thing Anthrax has done ever.” Of course most bands say this, but rarely is it the case when you throw the disc into your stereo — musicians are notorious for doing this.

Sonically, Worship Music is on par with the huge sound that Bob Rock gave Metallica. Engineer Jay Ruston is responsible for helping co-producers Rob Caggiano and Anthrax in achieving this booming sound. Do not panic however — Anthrax retains their thrash metal roots as you’ll hear in the meanest and heaviest riffs that they’ve come up with in a while. Case in point, “The Devil You Know” — the song kicks off with the pummeling main riff accompanied with a double bass part which repeats itself throughout the track in true thrash metal form. The track ends exactly way that it started, with the kick drum and riff, though by the end it’s been done ad nauseam. Meanwhile the single “Fight ‘Em Till You Can’t” showcases that Anthrax can still come up with strong melodic thrash songs in 2011.

Joey Belladonna retains the sense of urgency that was heard on classics like Among The Living and Spreading The Disease on this album. The best example of this is heard on the ‘epic’ “In The End”, which rivals classic metal blockbusters that came before it such as “Heaven And Hell”, “Stargazer” and “Hallowed Be Thy Name”. The last time I had the hair on the back of my head stand on end like this was when I heard “The Gettysburg Trilogy” from Iced Earth back in 2004.

Worship Music closes on a flat note with the filler tracks of the album. After the spectacular “Judas Priest”, the album becomes a trilogy of fluff as we are treated to less than stellar material starting with “The Crawl”, which sounds like a carryover from their last album We’ve Come For You All — it’s melodic hard rock and an attempt at piquing the interest of contemporary radio. “The Constant” has a very cool riff, but nothing more as it is quite forgettable. The closing track “Revolution Screams” is similar to “The Constant” where a great riff opens the song but all roads lead nowhere.

I’m fully aware that people who have heard Worship Music have been calling it this year’s Blood Of Nations, however with three filler tracks, the album is far from perfection — but it’s a surprisingly great effort. I would be very impressed if Anthrax comes back even stronger with the next record — that is, if they don’t implode again.