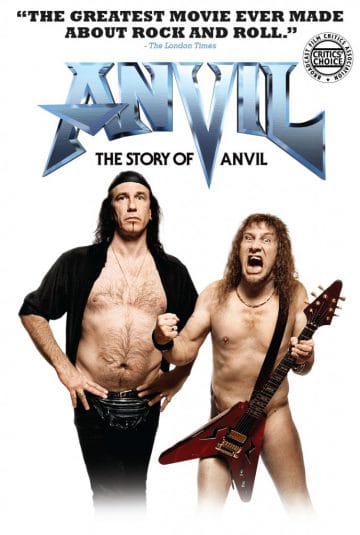 ANVIL
ANVIL! THE STORY OF ANVIL
Premiered at Sundance Film Festival in January 2008; released on DVD on October 6, 2009.

Review:
I know. The documentary Anvil! The Story Of Anvil was released way back in 2008 but it was recently released on Netflix, which is a huge milestone for any film and speaks volumes about what an impact that the Anvil documentary has made. In fact, Anvil! The Story Of Anvil has literally and positively changed the lives of the two Anvil stalwarts — singer and lead guitarist Steve “Lips” Kudlow and drummer Robb Reiner. For one, both (or at least Lips) do not have to work a day job anymore. I’m not talking about your cushy office day job but some rather back breaking physically demanding labourer type jobs. At the beginning of Anvil! The Story Of Anvil, Lips is seen delivering meals to various places in the middle of a full on Canadian winter while Reiner is seen busting rocks indoor in a rather dusty environment with some machine that I have never used before. At one point and in order to raise funds for a new album, Lips tries his hand in a call centre (but he only lasts a few hours spread over a couple of days). Clearly, these are not the type of jobs that you might necessarily aim for if you graduate with a college or university degree.

And that’s the beauty of Anvil! The Story of Anvil. Just about any viewer will fall in love with the passion that both Lips and Reiner — but especially Lips — exudes for everything concerning the Anvil band. Make no doubt about it, these two guys are passionate about what they do. So much so that even their respective wives are drinking the kool-aid as well seemingly hoping, thinking and feeling that that next album might well be the record that breaks things wide open for the band. Despite a strong start with a trio of cult like favorite albums — Hard ‘n’ Heavy (1981), Metal On Metal (1982) and Forged In Fire (1983) which received praise from such heavyweights as Guns N’ Roses guitarist Slash and Metallica drummer Lars Ulrich — Anvil released nine other studio albums over 26 years in relative obscurity by the time the viewer sees Anvil! The Story Of Anvil.

As it turns out, I was in the same boat as a lot of people. I knew of Anvil through their “Metal On Metal” video where they are shown playing the Super Rock Festival in Japan in I believe 1984. Aside from my taped copy of the Metal On Metal album, my only other reference to Anvil was the comic routine that they came up with for their video “Mad Dog” from their 1987 album Strength Of Steel. After that, I lost track of Anvil although I knew they still existed as I ended up seeing the Toronto premiere of Anvil! The Story Of Anvil in a packed downtown cinema location (I think) in April 2009.

The documentary Anvil! The Story Of Anvil did what it was supposed to do. It made me truly appreciate and only begin to understand some of the heartaches, “close calls” and efforts that Lips and Reiner had undergone in the 25 years since Forged In Fire to try to “make it.” Just by going on tour with them throughout Europe during the film, you realize how one gig can be absolutely terrific while many others are forgettable gut wrenching experiences where the band plays to only a handful of people in a seedy dive bar. You can see how Lips and Reiner do not have the money to pay a decent producer but yet somehow come up with the cash for their next album for which they have of course very high hopes. While I could easily tell you more about the documentary contents, suffice it to say that it is my favorite rock n’ roll documentary and one that I have seen many times over including recently again on Netflix.

Anvil! The Story Of Anvil should be a must have item for any heavy metal fan. It’s a story of hope, love, passion and a never say die attitude by two individuals who kept pursuing their heavy metal dream and who in many ways were finally rewarded more than 30 years after first starting their adventure.

Anvil! The Story Of Anvil — What happened to Anvil?