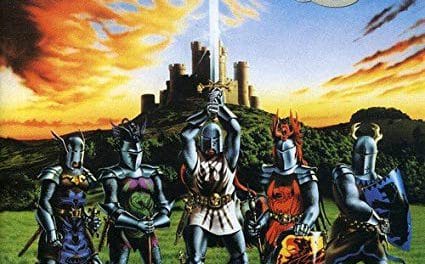 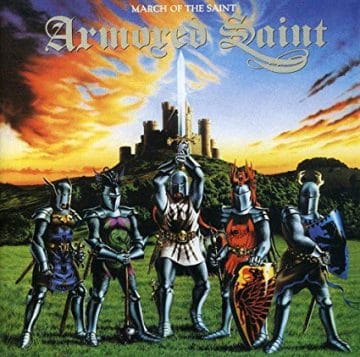 Review:
Armored Saint…. gotta be one of the coolest metal band names, ever. Although March of The Saint was Armored Saint’s first full-length album, it was not their first commercial release as it was predated by the band’s 1982 contribution to the Metal Massacre compilation, and their 1983 three-song EP on Metal Blade Records. It was the latter that brought the attention of major labels, resulting in Armored Saint signing with Chrysalis Records. So far… so very good. Based on their track record to that date, the band had built up a loyal cult following, and were certainly one of the ‘buzz’ bands of the metal explosion of the early ’80s. So much so, that Metallica tried to poach singer John Bush away from Armored Saint. Bush was later successfully poached by Anthrax for a run of several albums.

First impressions — the cover artwork portraying the five band members, befitting their name, as fully armored medieval knights. The band played this up live too, wearing bits of armor as part of their stage outfits in the early days. Into the grooves — ten songs, all of extremely high quality (well, “Envy” is a bit pedestrian), but oh boy, that production. Producer Michael James Jackson, fresh off of a couple of albums with KISS, manned the boards for the album, and the band members are on record saying that they were very disappointed with the results. Definitely a more lightweight production job than was called for although John Bush has said that he is not inclined to revisit the album and rerecord it. The band did redo the title track on 2001’s Nod To The Old School. Ironically, the album’s $300,000 budget is still being paid off by the band! But the highlights here are many. The opening title track, after an orchestral flourish, kicks off in very high gear, featuring the dualing guitars of Phil Sandoval and Dave Prichard (R.I.P., died of leukemia in 1990) and the phenomenal vocals of the incomparable Bush, one of metal’s best. The band’s first video track “Can U Deliver” follows. Some of my personal favourites include the superb ballad “Take A Turn”, and rockers “Mutiny on the World” and “Glory Hunter.” A rerecording of “False Alarm” from their EP closes out the album.

Unfortunately for Armored Saint, not only did the production of their debut album not do them any favours, but it came out in the middle of the thrash explosion worldwide, particularly in America with ‘the big four’ (Metallica, Megadeth, Slayer and Anthrax). Armored Saint’s more traditional metal left them as a bit of an outlier from the bands that were grabbing the headlines. To their eternal credit, they have never wavered and have stuck to their guns ever since, attracting an extremely loyal global fanbase.

I was fortunate to catch the band on the tour for this album. On January 18, 1985, they were first on the bill with W.A.S.P. and Metallica in Ottawa at the Civic Centre Salons. One of those seminal “Were you there?” concerts and Armored Saint were awesome! The ticket from the show is still in my collection, a memory of a fantastic night and my first encounter with this fantastic band.

Armored Saint‘s “Can U Deliver” video:

Order at: http://www.metalblade.com/armoredsaint/Armored Saint’s “Can U Deliver” from “March of the Saint”.