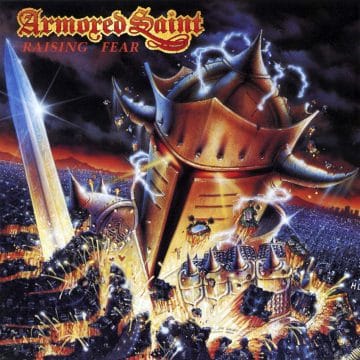 Review:
Armored Saint’s Raising Fear album marks the band’s third effort, their first without [guitarist] Phil Sandoval who left the band after Delirious Nomad (1985) and marks their last album with [guitarist] Dave Pritchard who would later get diagnosed with leukemia, which would ultimately take his life.

Armored Saint should have ‘broken through’ with this album or its successor Symbol Of Salvation (1991) but it was not to be. “I’m proud of them. Some moments are way better than others. I’m certainly not going to reveal that because I want people to feel however it is that they feel about those songs. I know people have a connection with their records. It’s their feelings and that’s good enough for me,” said [singer] John Bush to Sleaze Roxx in 2016 of the Chrysalis catalog. Raising Fear has a number of great moments: “Raising Fear,” “Out On A Limb,” a cover of Lynyrd Skynyrd’s “Saturday Night Special,” “Crisis Of Life,” my personal favorite “Chemical Euphoria” and one of the all-time Saint classics “Book Of Blood.” While the album was a solid effort, it didn’t edge out Delirious Nomad song wise and the production was a tad thin and lacked the ‘sonic punch’ that would have had people doing a double take.

In 2011, Rock Candy Records (U.K.) reissued Armored Saint’s first two records: March Of The Saint and Delirious Nomad with deluxe liners. The third of the Chrysalis era albums Raising Fear remains out of print after a ’90s pressing issued by Metal Blade Records. One would hope that this highly underrated metal album will once again be available for the general public to purchase and enjoy.

Armored SaintLive On Headbangers BallMinneapolisSong Four: IsolationDuring a time when glam bands were ruining music and polluting MTV, a band formed in 1982…