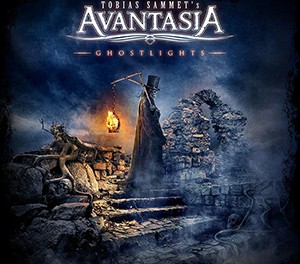 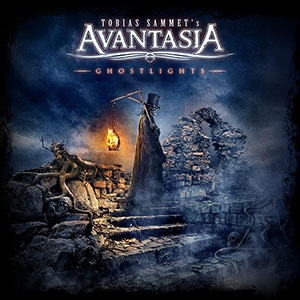 Review:
Prolific and ambitious are understatements when it comes to Tobias Sammet. It seems that he plans to alternate releases between Edguy and Avantasia from now on. This certainly has been the trend so far and he won’t get any complaints from me, especially if he manages to keep the level of quality high.

Only three years after Avantasia‘s previous album The Mystery of Time and merely only one year after Edguy‘s Space Police: Defenders of the Crown — one of the best releases of the band in recent years — Sammet manages to come out with Ghostlights.

If there’s something Sammet knows, it’s that music is a business, and so, since The Scarecrow, he always comes out with a radio-friendly poppy single that is released in advance to promote the album and increase sales. “Mystery Of A Blood Red Rose” is that song, and it starts the album in a most amiable way.

After that, things get into high gear with the 12-minute tour de force “Let the Storm Descend Upon You.” From here on, the guest singers start rolling. This song alone features Avantasia regular Jorn Lande along with Ronnie Atkins, Robert Mason and, or course, Sammet who — as always — sings on every song on Ghostlights. This track is the real album opener and features the signature Avantasia sound we have come to love: symphonic power metal with orchestral arrangements and a strong hard rock influence.

You know how on each Avantasia album there’s a song featuring a special guest that instantly blows you away? I’m talking — to name a couple- – Alice Cooper on “The Toy Master” on The Scarecrow and Jon Oliva on “Death Is Just A Feeling” on Angel of Babylon. Well, this time around, it’s Dee Snider‘s turn to shine in “The Haunting.” The song is simply amazing and a highlight of an album filled with impressive tracks.

Geoff Tate guests on the song “Seduction Of Decay” and it’s easily not only the best song he has sung on, but also the best he’s sounded in years. It’s also one of the heaviest pieces on the entire album featuring some great riffs from the always wonderful Sascha Paeth.

Title track “Ghostlights” follows, and on it — another Avantasia regular — Michael Kiske appears. The song features some great back and forth between Sammet and Kiske with a small bit of Lande thrown in for good measure. Sammet duets on “Draconian Love” with Herbie Langhans who I admit, I’m not that familiar with and didn’t recognize even though I’m a big fan of Beyond the Bridge‘s The Old Man And The Spirit album where he sings, and I will definitely check out his other band Sinbreed now.

Marco Hietala of Nightwish fame guests on “Master of the Pendulum” which is a fast power metal track with a great chorus. All-star guests keep rolling as Sharon den Adel makes her appearance on “Isle Of Evermore” which is the slowest song on Ghostlights and a great choice to feature and highlight her mezzo-soprano range.

Speed and riffs return along with Robert Mason on “Babylon Vampires” which is a splendid power metal anthem where Felix Bohnke drums his heart out and all three axe men — Bruce Kulik, Oliver Hartmann, and Sascha Paeth — get a solo! Jorn Lande, who always impresses, does so once more on “Lucifer” where he duets with Sammet. I’m glad he’s back on Ghostlights since I was disappointed and missed his singing on The Mystery oO Time. He and Sammet have produced some of my favourite Avantasia songs including “Promised Land” from Angel Of Babylon.

Atkins and Kiske come back on “Unchain The Light” which is a catchy hard rocker with a few symphonic touches here and there. “A Restless Heart And Obsidian Skies” closes the album in the highest of notes where the legendary Bob Catley, who did some great work on The Mystery Of Time, comes back to Avantasia and his return doesn’t disappoint. The song is all heart and melody using Catley‘s unique voice and some great dynamics to deliver the final nail in the coffin.

I can’t give enough praise here. Avantasia have become a paragon in the power metal genre. Each album has good to outstanding songs with a tremendous display of musicianship and a consistent array of spectacular guest vocalists. The band (if it can be called that with so many guests) is not only outstanding in its studio releases but also with its live performances, I’ve had the privilege of seeing them live twice in Mexico City and they have completely blown my mind each time.

Ghostlights is most likely an album of the year and another display of Tobias‘ song-writing and composition abilities. Overall, a fantastic album and another must have release from Avantasia.