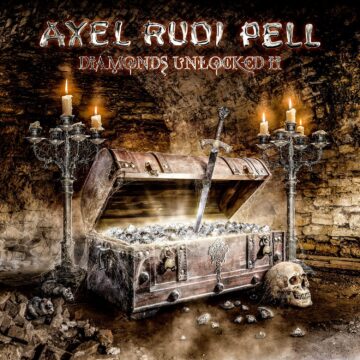 Review:
The marquee name may be Axel Rudi Pell but what compelled me to purchase Diamonds Unlocked II was sensational singer Johnny Gioeli‘s magnificent voice. I have definitely been late to the Johnny Gioeli party but I was simply blown away by the singer’s solo performance at the Rock N Skull Festival back in late October 2016 and I have been a big fan of his voice ever since. Just picture Gioeli singing to music coming from his cell phone and still being better than half of the acts that performed at the Rock N Skull Festival. It’s no surprise that guitarist Axel Rudi Pell chose such a wide array of songs to cover on Diamonds Unlocked II from ABBA to Tony Carey to Rainbow simply because Gioeli can really successfully sing any song you give him. It’s kind of like that very popular commercial for Life Cereal back in the 1970s. Two kids were debating whether to eat the Life Cereal so they gave it to little Mikey because “he’ll eat anything.” Pell obviously can choose to cover just about any song because Johnny Gioeli can sing anything!

Diamonds Unlocked II starts with the only original track — the instrumental “Der Schwarze Abt.” It is an atmospheric type track that leads very nicely into the very good cover of Sammy Hagar‘s classic “There’s Only One Way To Rock.” How good is the track? Well, Van Halen included the song in their set when Hagar was in the band. I really like that Pell acknowledged the Van Halen version of the song when contemplating covering the track. Gioeli puts on an impressive vocal performance, especially for the verses, and Pell came up with a cool guitar solo to put his stamp on the song. One thing that I don’t like about Pell‘s cover of the track is that Gioeli is handling all the vocals including backing and harmony ones. So when you might expect to hear the whole band singing the chorus together — “There’s Only One Way To Rock” — it’s actually just Gioeli‘s voice that you har which kind of makes for a bit of a disappointing chorus. Nevertheless, this is just a minor gripe as Pell‘s cover of “There’s Only One Way To Rock” rocks from start to finish.

The next track is a Rainbow cover and a bit more of an obscure one with “Lady of The Lake.” Gioeli‘s voice is tailor made for the Ronnie James Dio type songs and he does a great job on “Lady of The Lake.” I’ve never been a Paul Anka fan but I could become one because Gioeli‘s singing on “She’s A Lady” has me thinking that Anka must have a lot of great material. Or maybe it’s just Gioeli putting on a showcase performance and transforming a track that I normally wouldn’t listen to into something that I look forward to hearing. “Black Cat Woman” shows why AC/DC chose Brian Johnson to replace Bon Scott as obviously, Geordie had some cool songs. I like that Pell dug deep to find songs to cover. Well, that’s not true for the entire album Diamonds Unlocked II since Pell decided to cover The Rolling Stones‘ classic “Paint It Black.” Pell asks if we need another cover of “Paint It Black” and the answer is a resounding “no” and not “yes” like the guitarist states. This is one cover off of Diamonds Unlocked II that really falls short, and especially when you compare other bands’ covers of that song such as W.A.S.P.‘s really good rendition of the track. The keyboard solo on Pell‘s cover of “Paint It Black” is the highlight as the rest of the cover mostly disappoints.

One song that really rocks on Diamonds Unlocked II is “Sarah (You Take My Breath Away).” Gioeli simply kills it on this song and the chorus portion of the track is easily memorable. There are a few average songs that Pell decided to cover that Gioeli’s stunning voice can’t save like the pretty flat sounding cover of The Subways‘ “Rock N’ Roll Queen” and the slower paced cover of Jay Hawkins‘ “I Put A Spell On You.” Really at the end of the day, I could have lived without the last four covers (The Rolling Stones, The Subways, Jay Hawkins and ABBA). I would be remiss if I did not mention Pell‘s really good sounding guitar tone throughout the album. Overall, I still really like Diamonds Unlocked II but I often find myself shutting things down after the seventh track.