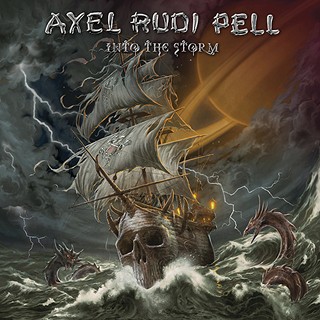 Review:
I love this — especially when a metal album starts off with an epic keyboard instrumental like “The Inquisitional Procedure” and then rips into the powerful “Tower Of Lies”. I was hooked, and never stood a chance.

Axel Rudi Pell is a German guitarist that has been very busy over the years. He started off with a band called Steeler, (Settle down Pittsburgh fans, it wasn’t named after your team!) and released four albums with them. He then went solo, and since 1989 has released 16 albums, the most current one being Into The Storm. To put it bluntly, this guy shreds. This album, and each release since 1997 when legendary singer Jeff Scott Soto left the band, has Hardline‘s Johnny Gioeli on vocals — a man with a raspy heavy voice and a high vocal range, in other words, the perfect voice for heavy metal.

Like I mentioned, this excursion into heavy metal greatness begins with the instrumental and then a powerfully heavy song. The versatility of Pell is on display throughout the entire album, as no two songs sound alike. “When Truth Hurts” is a moody ballad that features the great piano skills of keyboardist Ferdy Doernberg along with a very artistic guitar solo, great vocals and backup vocals — it has a feel similar to “Wasted Sunsets” by Deep Purple. Speaking of slower songs, “Touching Heaven” starts off as a ballad but transitions into a driving anthem. The cover of Neil Young‘s “Hey Hey My My” is a bit of a surprise that that starts off and ends as a piano ballad, but in the middle turns into a power ballad. Covers are nothing new from Pell, as he released an entire album of them in 2007 called Diamonds Unlocked, which has a very diverse list of songs.

I’ve mentioned a few ballads here, but don’t get the impression that Into The Storm is soft. If you do, you’ll likely need to pick yourself off the floor from the power of the rest of the songs. Of the 12 tracks two are instrumentals, two are ballads, and one starts off as a ballad but gets heavy. The other songs are all heavy and make me want to grab a guitar and jam out! I’m not saying there is anything wrong with ballads, as I love power ballads as much as the heavy songs. I just didn’t want to give anyone the wrong impression about this album — it is raw power. Axel Rudi Pell really shows his skill on “White Cats (Opus #6 Scivolare)”, an epic instrumental that really takes you on a trip. The music is intense at times and uplifting at others as he plays leads on an acoustic guitar during the beginning and then puts it down and breaks out the electric for some good guitar harmonies. I mentioned Deep Purple earlier, and “Way To Mandalay” is a great cover of the Blackmore’s Night song complete with violin provided by Leonor Bloch.

It’s unfortunate that people like Axel Rudi Pell and his band members are over looked in the United States, because the talent of this band is off the charts. This is power-metal at its best, which in my opinion, along with progressive, the best genre of heavy metal that there is — it’s certainly the most intelligent. I could go on and on about Into The Storm because I love this album. If you’re a fan of guitar greats like Yngwie Malmsteen and Jack Starr, and bands like Dio, TSO, and Deep Purple, Into The Storm is the album for you — get it, and crank it!