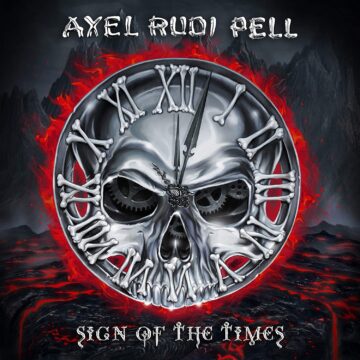 AXEL RUDI PELL
SIGN OF THE TIMES
Released on May 8, 2020 (SPV/Steamhammer)

Musically, the German postulant to the throne of Ritchie Blackmore continues to present a mix of hard rock with traditional heavy metal and typically European power metal, alternating moments of high octane with others that are as sweet as it can be. The guitar solos, I have the impression, are longer than ever. As for the lyrics, a touch of contemporaneity seems to have taken the place once occupied by kings, castles and dragons; something that can mean both an attempt to reach the public that are not into fantasy metal themes and a need to position itself, albeit in a very superficial way, in relation to the world in which we live.

“Not a day passing without bad news”, sings Gioeli in the fast-paced “Gunfire”, an invitation to Pell’s great tradition of opening his works with the pedal on the metal. Three tracks later – and a few bpm less – the tone is one of hope as the lyrics to “The End of The Line” state, “A new generation will find a way to the new world.” In the final stretch, ideal for those who used to dream and nowadays don’t even sleep anymore, “Living In A Dream” – which begins with a reggae-like guitar (!) – conjures up the reality of what you read in the news and see on TV — “Welcome to the real world, with violence all the day / Riots on the streets and no more children play”.

The title is of a Whitesnake song, but “Wings of The Storm” sounds much more like a tribute to the other band David Coverdale became known for, the mighty Deep Purple. Can you hear echoes of “Stormbringer” in this one? Finally, the sour grapes “As Blind As A Fool Can Be” fills the quota for ballads while the single “Bad Reputation” serves as a reminder of why hard rock is the most irresistible style (and the most guilty pleasure) of this so-called rock ‘n’ roll, in addition to being irrefutable proof that often less is more.