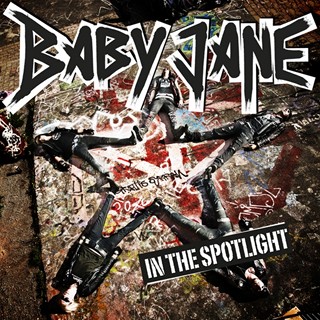 Review:
After five years of raising fists all around Sweden, Baby Jane have finally risen up from the gutters of Gothenburg and released their debut album. But let me tell you, they are no babies — they are the ‘street walking punks with the fist in the air’. Released via Live To Fight Productions, In The Spotlight serves up an explosive dose of dirty, sleazy street metal.

Baby Jane have performed many gigs since they formed in 2007 and this is made evident as they show much more maturity and professionalism than most other bands releasing their maiden record. There is plenty of rawness and energy in their distinct blend of punk and sleaze. On the punk side, each song has an ‘in your face’, ‘don’t give a damn’ attitude, whilst the vocals don’t range out too far. On the sleaze side, there are plenty of catchy choruses, adrenaline filled hooks, and use of gang backing vocals. This combination will appeal to the restless and untamed youth.

Upon listening to the first track, “Raise Your Fist”, you get a taste of what’s to come. Typically, the opening to a memorable CD is not necessarily the best song, but always a high energy, head-turner — and this is no different. “My Behavior” is my favorite of a number of stand-out anthems on this disc as it overflows with aggression and attitude. You’ll have to use one hand to hold back the other from hitting the repeat button until you reach the end of the album. “Face Against The Wall” is a bit of a throw-back to their previous EP releases, however the glam-styled backing vocals bring it to life. “The Secret Lies” is quiet a refreshing hard rock piece with many interesting dynamics which include a spoken breakdown. “Upside Down” is the only ballad on the album and comes at just the right time to stop the CD from acquiring a tedious, rambling effect. It possesses a marked haunting tangibility, similar to many ballads from Gemini Five and Vains Of Jenna.

The title track, “In The Spotlight”, is another classic Baby Jane anthem which helps pick the pace up again and is followed by “Next In Line”, another highlight of the album and one of only two to stray from a minor to major key, and this gives it a more upbeat feel. “This Is War” is the most Crashdiet sounding song on offer whilst “Adrenaline” is one of the few songs that fail to capture the imagination. The final song, “Night Explodes”, ensures the album ends on a high as it is only the second song in a major key.

Singer Freddie does a decent job on lead vocals, but his style is borderline punk so it lacks a little in range. However, the blend of dirty, sleazy and full-on lead vocals with clear and aggressive gang backing vocals is always enjoyable and refreshing. The rest of the band have all shown a new edge compared to their previous releases and the overall performance is more polished. The production by Christian Svedin and the band is very effective as the pure rawness is not lost along with the angst and reckless passion that can be felt.

Certainly there are many more great moments on In The Spotlight than not, and it’s safe to say that Baby Jane are more than welcome neighbors to fellow Gothenburg sleaze/street metal heavyweights Hardcore Superstar. There is only one way to listen to this CD… LOUD!

Reviewed by Alleycat for Sleaze Roxx, May 2012