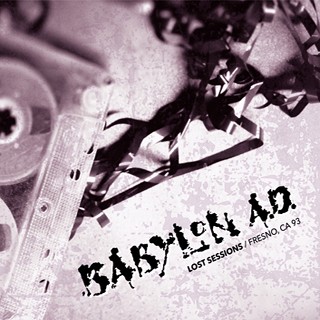 Review:
It’s releases like Lost Sessions/Fresno, CA 93 that make one realize how much great music was swept under the rug when grunge came storming upon the mainstream. People like to blame grunge for the death of hair metal, but in all honesty the genre was becoming far too predictable and watered down — so change was inevitable. Even though a changing of the guard was unavoidable, we undoubtedly missed out on some cool music because of it.

Babylon A.D. were never household names, or even within the upper echelons of successful hard rockers, but the Californian band did manage to release a couple respectable albums during hair metal’s waning moments. That is where Lost Sessions/Fresno, CA 93 comes in — it is a little collection of songs the group recorded back in 1993 for, what I assume, would have been the possible follow-up to Nothing Sacred. That’s why it surprised me that the three tracks uncovered and presented here more closely resemble their 1989 self-titled debut than the aforementioned follow-up.

Babylon A.D. were always a fairly straight-forward rock band, with some dark and moody elements, and the songs on this EP perfectly capture that sound. “Love Blind” is typical Babylon A.D., a song that builds itself up for the chorus and comes complete with a driving guitar riff. “While America Sleeps” uses the exact same formula as the opening track while the almost seven minute long “Love Is A Mystery” ventures deep into Great White “Love Is A Lie” territory. Rounding out the EP is a remix of the band’s most famous song “Bang Go The Bells” — recorded in 2010, this version doesn’t really build upon or take away from the original.

By far the biggest complaint regarding Lost Sessions/Fresno, CA 93 is the cost of the EP — at just four songs in length it is hard to justify the price tag for the physical CD. I also wonder if the band members could have dug deeper into their chest of memorabilia to find a few more songs to flesh out this album. The biggest positive here is that Babylon A.D. are back, and I think many of us hope this short EP leads to something bigger from the band in the future.