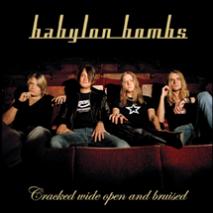 Review:
The Babylon Bombs have finally arrived with their debut full-length album. On this release the boys seem to have taken equal parts Kiss and Beautiful Creatures and mixed it with a heaping helping of 70s swagger. In fact this is the type of kick-ass groove laden rock that Gilby Clarke has experimented with the last few years.

The guitars boogie and strut through each song, a feel that few bands seem able to pull off these days. Things aren’t always fast and they aren’t always slow on Cracked Wide Open And Bruised, but it is the type of music that you just can’t sit still and listen to. The debut single “Let’s Roll” is a straight-ahead rock number and a great choice for the first single. “Superstar” is cool barroom boogie, complete with piano, and has a bit of an Ace Frehley feel in the vocals.

The retro boogie is in full-effect for “Lady Deny” – this is what Primal Scream could have sounded like if they rocked harder. “Every Dog Has Its Day” is an interesting song, and I have to wonder if it is a tribute to the band Salty Dog – the chorus sounds like them and some of the lyrics definitely scream tribute. “So Cruel” is very catchy, rock radio should be all over songs like this – but instead we get a steady stream of mediocrity. The urgency of the guitars on “Low, Broke & Pissed” is superb, but the vocals let the tune down. Just like the opening track, the album ends with another scorcher called “Something For Nothing”, perhaps the best on this release.

2005 has only been in swing for a little over a month and already I have got to review some gems – Cracked Wide Open And Bruised is one of those. This release may have more commercial potential than the others, but don’t let that scare you off. 80s hard rock fans will enjoy this, I know I did. Buy the album and hear samples at either www.babylonbombs.net or www.smilodon.se.