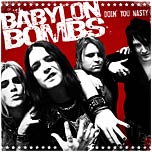 Review:
If sleaze metal is the musical equivalent of a harsh whiskey, then Sweden’s Babylon Bombs would be a smooth scotch. Like their countrymen the Zan Clan, these young guys know how to write a big hook, inject strong harmonies and write some fucking catchy music!

With their second full-length release the Babylon Bombs have exceeded all my expectations and make their debut pale in comparison to this smoking slab of vinyl (or whatever CDs are made of). Doin’ You Nasty just reaffirms my views that today’s rock radio is both disturbing and pathetic – because there is no way songs like “Jaded Heart” and “Hometown Hero” shouldn’t be on constant rotation. I find myself playing those two tunes over and over and over again, the melodies and choruses are perfect.

“Louder” is the first single, and even though it is a heavy party tune, it wouldn’t have been my first choice for the single. If they wanted to choose one of their rawer tracks they should have considered “Let It Loose”, a straight-ahead rocker that lays everything on the line. Other stand-out tracks are “Starstruck”, the slower “Proud”, and the full-speed-ahead rockers “White Trash Beauty” and “Moonshine Beat”. On their previous album the Bombs paid homage to Salty Dog and I’m willing to bet that “Crack Of Dawn” is their ode to Johnny Crash because they have a similar feel.

Without a doubt there is a lot to like on this release, but for me the album as whole gets overshadowed by the aforementioned “Jaded Heart” and “Hometown Hero” simply because those two tracks are SO DAMN GOOD! Now excuse me as I grind my fingers down to bloody pulps from hitting the repeat button on my CD player.