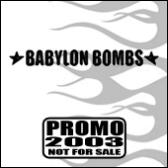 Review:
The Babylon Bombs are another newer band that take elements of the glam revolution and bring them into the 21st Century, with incredible results. Fastlane and BTM records really dropped the ball when they decided to release these Scandinavian rockers from their roster. This is one of the most impressive demos I have heard in awhile, excellent sleazy hard rock.

Kicking things off is “Let’s Roll” with its aggressive guitar attack, in fact the guitar sound and solo on this tune is incredible. A touch of current day punk, yesterday’s hard rock and a Beautiful Creatures vibe make for a killer opener. The interesting thing about the songs on this release is how downright catchy they are. I actually think they have commercial appeal, which usually I find makes for horribly boring music — but not in this case. The band manages to keep close ties to their roots, so the music doesn’t alienate the close-minded rock fan like myself (not an easy thing to do!).

I honestly can’t find a bad thing to say about the Babylon Bombs, and even though they remind me of other bands at various times — I just couldn’t pinpoint exactly who. Click this link as soon as possible, and get ready to be amazed.