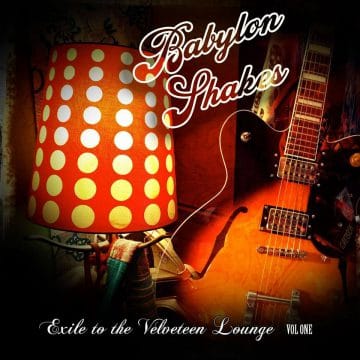 Review:
Vintage sleaze? It’s a new term apparently coined by newcomers Babylon Shakes whose retro sound mixture of ’70s classic rock and ’80s Sunset Strip glam / sleaze rockers may have you checking your old vinyl collection to see if this is an album that you overlooked 30 to 35 years ago. When I first heard Babylon Shakes, I automatically thought of early Faster Pussycat and in particular the group’s debut album. Perhaps it’s just Babylon Shakes frontman Chris Clark‘s vocals that really remind me of Taime Downe on that first Faster Pussycat album. The guitar tone emanating from Clark along with the rhythm section of bassist Gary Jordan and drummer Jeff Mortimer has a real ’70s sound to it with a bit of Hanoi Rocks mixed into it.

I first heard Babylon Shakes‘ debut EP after picking it up at the M-Pre Party in Columbus, Maryland, USA back in early May and really enjoyed it. Unfortunately, I ended up misplacing the EP along with a bunch of other new releases when I subsequently switched jobs and had to move part of my CD collection. After finally locating the box which contained the stack of CDs in question, I put Babylon Shakes‘ debut EP and remembered just how good the album is. There really isn’t one weak track on the album but at the same time, I don’t think there is one song head above the shoulders over the others meaning in my eyes, the group doesn’t yet have its signature or anthem song. Babylon Shakes are very good at letting the music breathe in that once they have a good melody or guitar riff, they will just ride that baby out such as on “Silver Tongue Devil.” The old school references are quite evident with the intro to the debut single “Velveteen Libertine” sounding like an old vinyl recording before the song really kicks in.

At the end of the day, Babylon Shakes‘ debut EP reminds me a lot of what Greta Van Fleet are doing in terms of sound. Greta Van Fleet have become a seemingly overnight sensation with their very Led Zeppelin like sounding songs. Babylon Shakes are borrowing heavily from the past (hence the term “vintage sleaze”) and are essentially making everything old new again just like Greta Van Fleet. Although Babylon Shakes released their debut EP Exile To The Velveteen Lounge Vol. I back in April of this year, they were initially planning on releasing Vol. II later this year and the great news is that this still appears to be the case now that the band is signed to record label HighVolMusic.

Interestingly, Babylon Shakes may suffer the same fate as Greta Van Fleet last year. The young Michigan rockers had released two EPs (Black Smoke Rising and From The Fires) in the same year, which divided the Sleaze Roxx readers’ votes for both EPs when it came time to voting for the album of the year. Cumulatively, the votes that Greta Van Fleet received for both EPs would have meant a #14 finish on the Sleaze Roxx Readers’ Top 20 Albums of 2017. Babylon Shakes‘ debut EP is definitely strong enough to finish as one of the top charting debut albums on the Sleaze Roxx‘s year end charts for best albums. The question is whether Babylon Shakes‘ second EP to be released later this year will steal some of the thunder from the band’s very good debut EP?

Production:
Produced and engineered by Reese Roper and Babylon Shakes
Mixed and mastered by Zach Jones