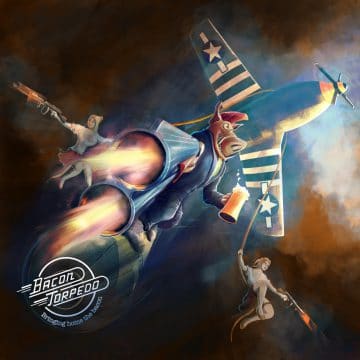 Review:
Alright, so Bacon Torpedo from Aalesund, Norway. I absolutely love the name, but where did it come from? How about some lyrics.

Yep, that’s from Mötorhead’s “Eat the Rich.”  When I asked how they decided on the name, singer Andreas Vinje shared this. “Playing in a hard rock band in Norway in 2020 is not easy. Rejected from most major cities with venues that only book pop acts, we have found ourselves playing the outskirts, and it has taken us to some special places. Norway is long, and it’s not unusual to make an eight hour drive to the gig. We wanted to make wild and fun hard rock and roll, the kind that people lose their shit when hearing. And a band with that vision needs a total bat shit crazy name.”

To be sure. The bat shit crazy name goes with the high energy rock and roll they have produced on their first album. Actually Bacon Torpedo was noticed by Sleaze Roxx back in 2018 with their debut EP. From what I’ve heard, that EP was pretty raw, but this full-length debut is polished and presentable.

Of course they had to start of with my most hated of tracks, the “Intro.” Thankfully, the pulsating techno and oddly sensual repetition of the band’s name only lasts 22 seconds, before seamlessly leading into “Bacon Torpedo.” This high energy track brings to mind a whole plethora of comparisons from Danko Jones to Airbourne. The post-solo breakdown at about the two-minute mark really made me pay attention. More of this please!  “Baby Snakes” is next up, with a blazing guitar line and generally an over the top presentation. Since this is the only track available on YouTube at this point, it is a pretty good representation of the band. Initially, I was concerned about the not so politically correctly named “LGBT”… but it’s actually “Liquor, Guns, Bacon, and Tits.” I can get behind three out of the four titular influences. Never mind, it’s still a good hard rocking biker tune. “Overload” is heavily Mötorhead influenced with vocals that could easily be Lemmy. An homage well done.

Not sure what to think of “Can You Dig It.” Aggressive and impulsive for sure, but a blast more than a burn. It explodes well out of the gate, but really doesn’t have the staying power to keep me interested. “Red Light Girl” also features Lemmy style vocals, and a pretty cool bass line to boot. Another hyperactive track, “Whisky Holiday” seems like the band needed to beat out some aggression rather than focus on what made some of the previous tracks more interesting. Finally, “Herr Flick” with its clear AC/DC guitar influences, brings the album back to what was most interesting in the album’s early offerings… straight forward hard rock with solid performances from all band members.

Bacon Torpedo is a great name… it sure got my attention! Think of a cross between Mötorhead, Danko Jones, AC/DC, and Airbourne. This was a great album to listen to and I’m glad it crossed my desk. I do think they need to focus the sound, because I thought there was a distinct stylistic difference between the first and second half of the album. It’s as if later tracks were trying too hard to reflect their Mötorhead roots while abandoning the solid guitar riffs and harmonies in the first few songs that, in my opinion, sounded better.

After chatting with guitarist Sindre Myskja and getting some stories from singer Andreas Vinje, I’ve learned much about this band. That was greatly appreciated. Thanks to both for their time. Unfortunately, at the time of publication, there are no hard links to offer, but the new album can be sampled and purchased via Spotify, iTunes, Tidal, and YouTube Music. You can also contact them via Facebook for a limited print vinyl or hard copy CD.