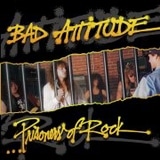 Review:
Suncity Records have released some great forgotten gems over their short history, but Bad Attitude may in fact be the best of the bunch. To my ears this CD would have been the logical follow-up to Fastway‘s debut, and as much as I like All Fired Up, Prisoners Of Rock is every bit as good.

The Fastway comparisons are undeniable as the vocals often remind me of Dave King while the guitar licks rival anything Fast Eddie Clarke has done. Because of that, Fastway keeps coming to mind as these Pennsylvania natives scorch through song after song. “Stuck In U”, “Down On Me”, and “Bad Attitude” are all furious guitar-oriented rockers filled with sleaze, sex and boys locker-room humor. It isn’t the type of music that impresses so called music scholars, people that prefer to listen to music with their head. Of course Bad Attitude‘s music is in fact delivered from the head, just the one in the crotch!

Even though Prisoners Of Rock is a sleaze rock album from beginning to end, the band does mix things up a little a couple of times. “Bad Boy Shuffle” for instance does in fact add a hint of shuffle to their brand of hard rock and has a great bottom-end – actually the entire disc keeps a steady and reliable beat – while “Highway 69” has a slight southern feel to it. And like any 80s band worth their weight a ballad entitled “Leaving You” is included, a ballad that sounds more like something Ozzy Osbourne would attempt than, say, a Poison or Warrant.

Bad Attitude‘s Prisoners Of Rock is one of those albums that doesn’t try to be something its not. It is hard rocking party music with incredible vocals, killer guitar riffs and a flawless bottom-end…what more could any fan of this website want in a band? Sex, drugs and rock ‘n’ roll – isn’t that the foundation that sleaze was based upon?