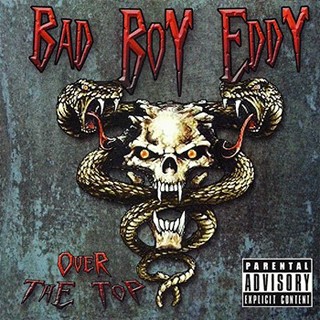 Review:
Bad Boy Eddy is a relatively new band, filled with experienced musicians, which seem to have an identity crisis. I don’t mean that in a derogatory way, just that these California natives play everything from sleaze rock to traditional heavy metal with fairly impressive results on their debut album Over The Top.

One of Over The Top‘s most impressive slabs is “Fever”, a vicious track that showcases Eddy Vega‘s powerful yet gruff vocals that conjure up images of Sledgehammer Ledge. “She Gives Me A Feeling” is more of the same while the heavier “I Don’t Want You” sounds huge with the infusion of thousands of screaming fans. “SuperSonic Freak” is forgettable, and a poor choice of first single in my opinion, as it ventures too far into modern metal territory but things pick up again during “Funky Monkey”. Based on past experiences funk and rock should never mix, as the results are usually atrocious, but this track has a sexy swagger that makes it work surprisingly well.

“Rad Ruby” comes out of nowhere and completely captures the feeling of late ’80s hair metal, sounding a little like Cats In Boots in the process. “Teenage Sacrifice” opens with a melodic intro but quickly shifts gears into a traditional heavy metal scorcher before “Fly Away” goes in the opposite direction with a sound that could rival the sappiest of Firehouse ballads. The crowd noise, screams of ‘San Francisco are you ready’, some guitar shredding, and more Firehouse type moments, are featured in the arena rock sounds of “Maker Of Dreams” — and thus wrapping up an album that totally lives up to its name.

Heavier than your typical hair metal band, thanks in part to a great production job, Bad Boy Eddy offer up a few different takes on the ’80s metal scene during Over The Top. This is the type of music that is destined to ferment in the underground, and if Bad Boy Eddy sticks with the formula they could brew a fine vintage.