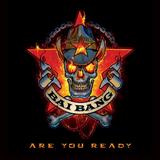 Review:
Its been long time cumin’ for Bai Bang who released their last album way back in 2000. The band have been around for over twenty years now, and in that time released one of the catchiest rock songs ever…”X-Ray Specs”. The question now is, can Bai Bang capture the magic of that incredible track and do it all over again? Judging by Are You Ready, the band is back with their strongest set of songs to date.

Album opener “I Love The Things You Hate” impressively shows which route Bai Bang have taken on their latest release. This is one hell of a song, mixing together a Kiss-vibe with huge backing vocals that are heavily reminiscent of Def Leppard, and resulting in a fist-in-the-air party anthem. Following close on its heels is “Born To Rock”, which is a pretty typical Scandi-rocker not unlike the stuff Wig Wam or The Poddles are doing at the moment. These two songs are basically what the whole record represents – either Def Leppard and Kiss influenced numbers like “Party Queen”, “We Come Alive”, “Longtime Cumin'” and “All The Little Things” or Wig Wam/Poodles driven “Are You Ready I’m Ready”, “Only The Best Die Young”, “Bad Boys” and “Bigtime Party”.

When it is this easy to summarize the songs into two categories, one might think that Bai Bang are simply copycats without adding their own touch. And well, this is sort of their problem. The whole record lacks a bit of identity, mainly evolving from the fact that they have worked with various producers and writers, which also shows in the varying production quality. Compare “Bad Boys” to “Party Queen” and you will know what I mean.

The strongest songs to my ears are, once again, those co-written by Swedish guru Chris Laney and it would have been great to get a whole album in that Def Leppard/Kiss vein. That doesn’t mean that the other songs are weak though, they are hook-laden as well, but just miss that extra punch to get them on par with the aforementioned ones.

All in all Bai Bang have delivered a very enjoyable album, which during its strongest moments is a contender for a ‘top spot’ in every melodic rock lover’s year end list. A major letdown though is the length of Are You Ready“, which clocks in at only 33 minutes. Anyway, that’s quite a long time when you are singing along to every song – and you probably will!