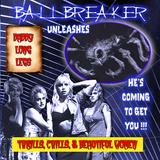 Review:
It’s been a long time, too long in fact, since we last heard from New York’s Ballbreaker. It was all the way back in 2005 when this quintet released Hangman’s Tree, an excellent slab of AC/DC inspired raunch. Four plus years later and not a single thing has changed; not a band member, not the production team and not the band’s barroom boogie sound.

It’s not often that a band can disappear for so long and pick up right where they left off, but Ballbreaker has managed to do it. Even though you could call this band an AC/DC derivative, they do mix things up a little bit – the title track for instance has a sinister Alice Cooper vibe to the vocals. For the most part though, Daddy Long legs is filled with boot-stompin’ hard rock.

Really, the only time Ballbreaker misses the mark on this new CD is during “B Hole Boogie” and “Shanghai Showdown”, which are both slightly annoying. The steady beat of “Guilty Pleasure” and the balls to the wall “Light ‘Em Up” make up for any missteps however. The final two tracks are also worth the price of admission, just check out the Cinderella inspired scream during the chorus of “Old School”.

This disc seems to fly right by, which depending on how you look at things could be good or bad. I suppose you could argue that after four years Ballbreaker could have put together more than eight new songs (“Redline” is more less a drum solo), but at least the band have stayed true to their original sound – I give the guys credit for that much. Let’s hope we don’t have to wait another four years before we hear from Ballbreaker again.