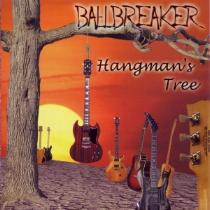 Review:
Albums like Hangman’s Tree are the exact reason I started this website. Ballbreaker prove once again that attitude and delivery play as big a part in creating a flawless sleaze album as musicianship and flash. Bands like this exist for the live experience, and any albums they may release come across almost as an after thought. You know damn well an album like this will never sell in huge quantities – this was even true in the 80s when hard rock was king – the music is just too raw, unpolished and unrelenting for the casual listener. So knowing that this type of music won’t make a musician rich, you have to assume that any band that pursues sleaze metal does it for the pure love of the music…the love of taking kick-ass rock to every shithole bar around the globe. Ballbreaker is one of these bands.

Clocking in at just over 30 minutes, Ballbreaker‘s sophomore album delivers a short but effective shot to the gut. Some people might think a half hour is too short for an album these days, but I say fuck that. It may be too short if there was some filler added, but Hangman’s Tree contains zero filler…nada, zilch.

The intro to “Two Pump Chump” start things off on the right foot, and then the blazing guitar riff, whiskey-soaked vocals and steady bass pattern energize this song about a guy with a lack of “endurance”. The woman asking “what, that’s it?” and then beginning giggle is the perfect addition to a killer track. “Hangman’ Tree” ventures into Dirty Looks territory, and I was even waiting to hear the lyrics “Senor Cuervo take me home”. “Snakebite Blues” manages to capture the energy of AC/DC‘s “Rocker”, while “When The Hammer Comes Down” is the type of song that made the dark side of 80s rock so great. The Four Horsemen‘s Frank C. Starr is likely drinking in heaven wishing he could have recorded “Little Misunderstood”, a song that would have fit like a glove on any Horsemen classic. Throw in a cover of the Beastie Boys‘ infamous party anthem “Fight For Your Right To Party” and you have the perfect release to spin while getting shit-faced.

I originally heard Ballbreaker on www.mp3.com (before it turned to shit) several years ago. Anyone familiar with the old site knows that it primarily focused on independent artists, many of which never released anything more than a demo. So when I was unable to find any information about Ballbreaker I just dismissed them as a killer band that faded away. To my surprise Ballbreaker hadn’t faded away, and in fact was still clawing away in the gutters of rock & roll – sometimes there is justice in the world of rock. There really isn’t much more to say here, except that Hangman’s Tree is a must own album for fans of sleaze. The album can be ordered…ummm I mean the album MUST be ordered at www.ballbreaker.net.