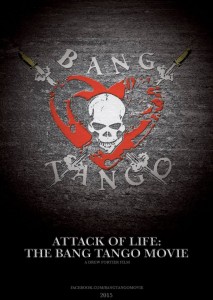 Review:
Documentaries about hard rock/heavy metal bands seem to be the “in” thing these days and we now have another ’80s era metal band that gets the film treatment. To be fair, the Attack Of Life: The Bang Tango Movie has been four years in the making so the timing of its possible release coincides well with the many documentary releases about hard rock/heavy metal bands these days but the making of it might well predate this latest trend. What makes the Attack Of Life: The Bang Tango Movie a bit different from the other documentaries is that the film ended up being done by an actual Bang Tango member. You see, although film creator, producer and editor, Drew Fortier, was not in Bang Tango at the time that he started the documentary four years ago, he did end up joining the band earlier this year as one of its guitarists. Given that the Attack Of Life: The Bang Tango Movie has yet to be released or even have a release date, I have to thank Fortier for the opportunity to view and review his film at such an early juncture.

It seems that usually, documentaries of hard rock/heavy metal bands have a central theme upon which the movie is built around and that is a gateway to get people that are not into the band interested in the film. For instance, the Anvil! The Story Of Anvil! documentary was focused on the theme of why didn’t Anvil make it big? The Quiet Riot: Well Now You’re Here, There’s No Way Back documentary was focused on the group — or really Frankie Banali — continuing after the death of lead vocalist and founding member Kevin DuBrow. The Hessler: ‘The Last Kamikazis Of Heavy Metal’ documentary seemed focused on the sometimes tumultuous relationship between leader, founder and guitarist Igz Kincaid and the remaining band members while the band tried to break through. On the other hand, the Attack Of Life: The Bang Tango Movie is really a straight up chronological story of the group Bang Tango from their beginning to where they are now with only one band member (Joe Lesté) left over from the band’s “glory days.”

While the chronological setting of Attack Of Life: The Bang Tango Movie‘s does not hamper my enthusiasm to view the film in any way given my personal interest in ’80s hard rock/heavy metal bands, I wonder if the documentary will resonate with a broader viewing public who might not be as in tune as I am with that scene/era. The one theme that could have been explored a bit further and is certainly intriguing would have been to focus more on the complex and enigmatic Bang Tango frontman Lesté who has carried the Bang Tango flag for over 25 years. It is definitely touched upon throughout and as the film progresses but it is not the main theme that is first introduced to the viewer to reel them in so to speak.

So really, what you have at the end of the day with the Attack Of Life: The Bang Tango Movie is a straight up chronological view of Bang Tango and the ups and seemingly more downs that the band has gone through. Being admittedly not that familiar with Bang Tango or even into their music, I found the documentary to be interesting, intriguing and certainly very informative on the band’s journey to where it’s at. It would have been nice to get some more insight on Bang Tango from Lesté himself but the mercurial frontman was not an open book for the documentary with his tendency to pass on discussing certain more controversial topics throughout the film. The real voice of reason in the Bang Tango film turns out to be former guitarist Mark Knight whose interviews are featured consistently throughout the documentary and who comments on virtually all aspects of the group despite not being in the band since really 1995.

There are a lot of cool parts to the Attack Of Life: The Bang Tango Movie but I don’t want to give them away so I will let you discover them for yourself if and when the film ever makes the light of day and gets a proper release. There is no question that Bang Tango fans will most likely lap up this documentary and any fans of the sleaze rock or late ’80s/early ’90s hair metal genre will likely enjoy the film as well. Whether the Attack Of Life: The Bang Tango Movie appeals to a wider audience than that is the big question mark going forward.