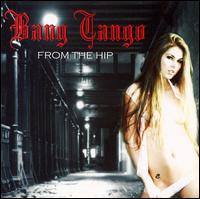 BANG TANGO
FROM THE HIP
Released in 2006 (Perris)

Review by Skid:
The funk-less version of Bang Tango is back, and this time vocalist Joe LeSte has a completely different backing band then what appeared on Ready To Go. Like that previous release, Bang Tango purists likely won’t care for From The Hip. This line-up is similar to classic Bang Tango in name and voice only, the music itself is far more in your face and sleazy then anything the original band did.

If you are able to accept the fact that Bang Tango has changed, you will like this release. At times it reminds me as much of a Faster Pussycat or Beautiful Creatures album then the band it actually is! With that being said, I don’t feel From The Hip is quite as strong as Ready To Go. But From The Hip does have its moments, and enough moments to make it a worthwhile purchase.

“It’s All Ok”, “Ain’t Nothin’ Better”, and “I’m The One” are damn fine rock songs, where the funk has been replaced by a sleazy swagger. “Go, Go, Go” is pure Beautiful Creatures music, pick one of their CDs, add this tune to the tracklisting and it would fit like a glove. The remaining songs are average to me, not bad, but also not great.

Review by James:
In 2005 Bang Tango really won me over when I picked up 2004’s Ready To Go. I was already a fan of Beautiful Creatures and had heard some Bang Tango before that, but really got into the band when I discovered that record. From there I worked my way back through their catalog and found a lot of great songs that are still on my playlist today. So, I was naturally anxious when I saw they were releasing a new CD called From The Hip.

I was pretty patient with this one as it was initially supposed to be released in May and got pushed back to a late September release. I anxiously placed an early order on the Perris Records web site and got it just days after it was finally released. And I must say I have a mixed reaction to the disc.

The thing that I love about Bang Tango‘s catalog is it is pretty diverse. It ranges from funky bass lines to screaming metal and back again. Hell, Ready To Go is a musical adventure in and of itself with the diversity of that record simply blowing me away. That diversity is not on display as much on this disc. I’m not saying it isn’t a good record as it is, but it isn’t as diversely mind blowing as Ready To Go was.

Song by song, here’s a review.

2. “Ain’t Nothin’ Better” – Well, on this album there are better tracks. This song has great elements but the chorus is just a little lacking. It’s not a bad song but it isn’t going to set the world on fire.

3. “Go, Go, Go” – This song kicks some serious ass. It has a classic feel from the opening and simply doesn’t stop at any point in the song. This is one that probably would translate very well live as the lyrics are so freaking cool you almost want to sing along at first listen. Very hair metal and to me, that’s very cool. Joe Leste sounds sensational on this cut and all the elements and stars are in perfect alignment here. This one could’ve been a great track on Ready To Go.

4. “Carry Me Up” – This song is very sweet and has some pretty good lyrics. I think the only thing that is missing is some sort of polishing on the production. Everything is there for this one to be a classic but it just doesn’t feel like the production is complete on it for some reason. Regardless, sweet song with good lyrics.

5. “Mother Mary” – This one is for the classic Bang Tango fan. If you liked the song “Dressed Up Vamp”, this one is for you. In fact, I even think they used similar production elements on Joe‘s voice. Strong track but still not quite mind blowing.

7. “I’m The One” – This is another one for the classic Bang Tango fan. A touch bluesy, but it explores Joe Leste‘s amazing voice a little more and feels polished. This one feels complete and well tooled. I really like this cut.

8. “Simple” – This song has a lot of great elements. The musicianship is killer on this cut including drums that stand out and a great guitar riffs. I like the song itself as a whole, but again it feels like a touch of production is missing especially on the vocals (not that Leste‘s voice needs any digital assistance. Only the American Idol folks need the digital assistance in singing, you know, the singing contest winners who are shocked to find out when recording that they can’t hold a note for more than 2 seconds because they keep doing Whitney Houston impressions by doing every one of the Sound of Music notes in one word. Oh yeah, mixing. Mixing is the word I meant. It needed a touch more mixing.

9. “One More Spin” – This song kicks ass. This one combines classic Bang Tango with Ready To Go era Bang Tango and hits the mark perfectly.

10. “Angel Devil” – If you have Tesla‘s Into the Now CD, this final cut reminds me of the final cut on that disc. Very basic, very dark, and clearly has a lot of meaning to the singer.

Overall it is not a bad record, in fact, it’s pretty good. But despite the several month delay, it still doesn’t feel complete. I hate to keep comparing it to Ready To Go, but that record was so complete, well produced, and had such great songs that almost anything that followed would be a disappointment. This isn’t quite a disappointment but I will say that I had hoped for an album a little closer to that one.